What began with nostalgia eventually lacked in delivery. 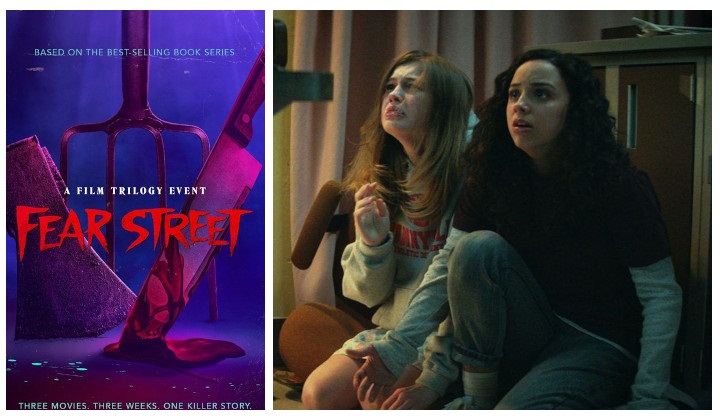 I love a good scare and was hoping Fear Street would do it for me after reading reviews of it being the “biggest horror gambit to date” but just because it didn’t play out the way Haunting of Hill House did in giving me nightmares, it still got me hooked – and not the kind of way that Candyman preys on his victims.

Each movie is set in a different year (1994, 1978, and 1666 respectively), with a storyline that intertwines, and is filled with twists, revelations, mystery and a fair bit of gore.

Directed and co-written by Leigh Janiak (Honeymoon), the trilogy begins in 1994 when a group of teenagers discover terrifying events plaguing their town of Shadyside, Ohio.

As the story develops in Fear Street: 1994, we find out the basis of the trilogy revolves around a series of slayings around town which a group of teenagers believe was brought on by the curse of Sarah Fier (Kiana Madeira).

We are then taken 16 years back where Fear Street: 1978 takes place at Camp Nightwing in which we experience a gruesome summer-camp massacre before finishing the trilogy with Fear Street: 1666 to reveal the curse’s origins.

Nostalgic elements that draw you in

As a teenager growing up in the 90s, Fear Street: 1994 pulled me in with its nostalgia that felt a lot like Wes Craven’s classic slasher flick Scream with its novel innocence that surprises you quickly.

What gave this boomer a shot of melancholy was undoubtedly the music with its mainstream choices that amplified teenage angst at the time like Nine Inch Nails and 1994 hit single – Closer, which played in one of the early scenes and the song title alone is a hint of what’s to come.

Music wasn’t the only thing the movie did well with to be transported to the 90s, but the presence of chatting on AOL, fashion and the overall brashness that era represented contributed to it as well.

Essentially, the 1994 instalment of the trilogy was a referential throwback and it was fun.

The essence of “campiness” in the 70s

Even though I wasn’t around in the 70s, I’ve indulged in enough campy horror movies from that era, like Sleepaway Camp and the original Halloween, that made me feel like I was watching one again in the 1978 movie of the trilogy.

It had many of the cinematic elements like gore, gratuitous “R-rated” scenes, and cheesy one-liners, in addition to a crucial revelation that leads back to 1994.

However, that feeling of excitement soon dwindled in Fear Street: 1666

The final of the three movies had me doom-scrolling on my phone most of the time.

Not like I’d know what 1666 was like but for the same reason why the first two movies got me hooked, Fear Street: 1666, at least the first half, fell flat on its face.

From the cringe-worthy accents that sometimes sounded British to the acting that felt a bit jarring to me.

As essential as this one was in piecing the story together, I just couldn’t get past all the other aesthetics.

Not all of 1666 was set in that era and eventually circled back to “present-day” 1994 which completed the Fear Street journey.

Based on a pure entertainment standpoint, I’d give the Fear Street trilogy a “B” for being binge-worthy with nostalgic elements and a story that left me satisfied without a need for any follow-ups.

Although the books the trilogy are based on was for young-adult reading, the Netflix series would probably appeal more to those who are old enough to remember what the early/ mid-90s were like.