Those found guilty of breaking the rules could be fined a maximum of RM20,000 or spend 3 years in jail. 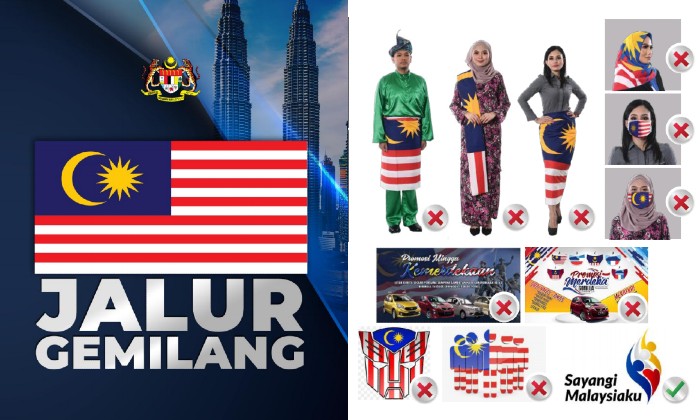 “Let us fly the Jalur Gemilang however we want,” cried some Malaysians in protest to new guidelines highlighted by the government on the proper use of the national flag.

They took the form of a recent PSA by the National Unity Ministry which outlined a set of rules commissioned by the Prime Minister’s Department on how the national flag should be used.

The guideline states several prohibitions against wearing the Jalur Gemilang as pieces of clothing like a songkok, sampin, tudung, face masks, or having the national flag as items and decorations like tablecloths, umbrellas, cushion covers, and others.

The posting described that fashioning the national flag as clothing or other items must be avoided except during the Merdeka month celebrations, and even then, must be done so in moderation.

Malaysians however find it hard to rationalise why it was suddenly against the rules to use the national flag however they pleased.

Many believed that it was okay to let people’s creativity shine when showcasing their patriotic spirit as long as the Jalur Gemilang was respected.

Honestly why government loves to make everything hard these days huh ? https://t.co/GBkXls8pFV

is this even necessary? why do you want to restrict creativity? the flag is respected for years and years, there’s no problem even if we wear it on our body and WHY THIS COUNTRY IS SUDDENLY TURNING INTO NORTH KOREA https://t.co/mAIvmS8eSo

People also pointed out how this was not a problem in the past and even gave examples of how the Jalur Gemilang had been proudly used by some of our national heroes in the spirit of #MalaysiaBoleh.

but our very own malaysian icons are wearing it too ??? https://t.co/yzeo72pxhn pic.twitter.com/Hxrbj4K9GC

In 2006, then Deputy Culture, Arts, and Heritage Minister Datuk Wong Kam Hoong also mentioned that it was okay to wear costumes and clothing imprinted with the Jalur Gemilang as long as it’s done so respectfully to show pride and love for the country.

Read More: Why Is It Wrong To Fly The Jalur Gemilang Upside Down?

However, it seems that a government body decided just last year that usage of the flag needs stricter guidelines.

A 2020 publication released by the Communication and Multimedia Ministry’s Information Department (JAPEN) outlined several rules on how the Jalur Gemilang should be utilised in formal and informal situations;

According to the guidelines, those who disobey the rules or degrade the national flag can be prosecuted under Sections 3 and 5 of the Emblems and Names (Prevention of Improper Use) (Act 414) which can carry a maximum punishment of RM20,000 in fines and three years in jail.