Experts theorized the animal’s return may be due to the beach being clean and quiet because of the MCO. 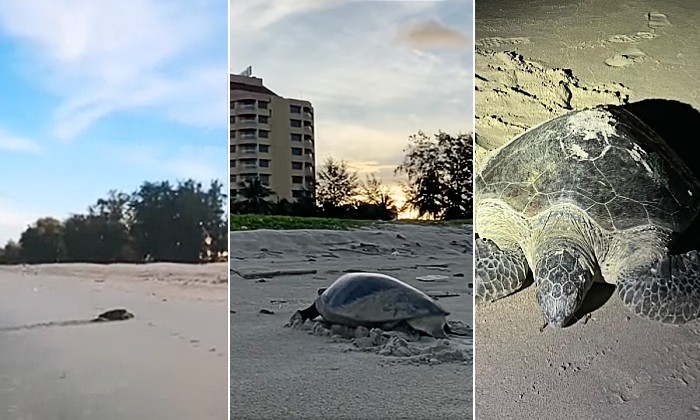 It was a night of celebration in the bustling beach town of Kuala Terengganu when a very pregnant Green Sea Turtle made landfall to lay her eggs at the Pantai Batu Burok beach on Monday (16 August).

By the looks of the viral videos and pictures going around on the web, it appears that beachgoers were beyond excited by the sight of the mama turtle who came to land at around 7 pm on a public beach behind a local hotel.

Footage showed the giant reptile slowly making its way up the beach and finding the perfect spot to bury her eggs.

Those who were there had the awesome pleasure of witnessing the turtle diligently digging into the sand with her flippers before laying a batch of eggs and returning to the ocean. The whole delivery took mama turtle around an hour to complete, and she was back in the water at around 8 pm.

The turtle was identified to weigh around 100kgs, estimated to be between 15 to 18 years of age and had laid a batch of 50 eggs.

Quite somberly though, the eggs were quickly dug up and handed over to the Terengganu Fisheries Department (TFD) for conservation efforts to ensure that the baby turtles would hatch successfully and be released back into the sea.

It is said that this is the first time in 16 years that a turtle had made landfall to nest in Pantai Batu Burok – a sandy beach that stretches for over 200km and is known to be quite the popular hangout spot for locals and tourists alike.

Experts speculate that the return of the turtle to the beach may have been triggered by it being cleaner and devoid of humans because of the movement control order (MCO).

According to the TFD, there used to be four different species of sea turtles that nest in Terengganu’s beaches and islands:

However, the last time anyone saw an Olive Ridley Sea Turtle making landfall was in 2003, and the Leatherback has not been spotted anywhere since 2017.

Pollution, habitat loss, indiscriminate fishing activities and the illegal trade of turtle eggs remain the biggest threats to these aquatic creatures here in Malaysia and across the world.

It is also against the law for people to physically touch or disturb turtles according to the Malaysian Fisheries Act 1985 (Act 317) where no person shall fish for, disturb, harass, catch or take any aquatic mammal or turtle in or from Malaysian waters.

Members of the public are advised to limit unnecessary activities at the beach in order to make Pantai Burok and other parts of Terengganu a turtle-friendly environment.

Since turtles are very sensitive to light and sound as well as very particular to where they chose to lay their eggs, people are encouraged not to crowd the seashore or burn campfires by the beach at night.

Local activists are also seeking cooperation from the authorities as well as owners of private properties near beaches (like hotels and resorts) to reduce the amount of lighting they have so as to not disturb any incoming turtles.

It would also be a good idea to plant trees at the shoreline to act as a natural barrier for turtles to safely come ashore and nest.