The word ‘aiyo’ is officially recognised as a South Asian expression of distress, regret, or grief. 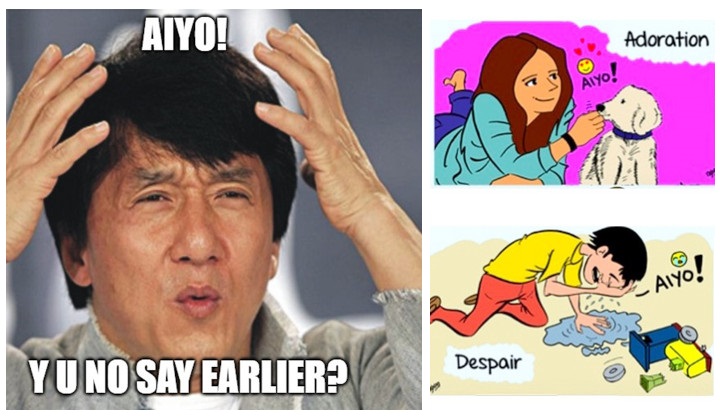 The news about one of this region’s popular slang for “Oh dear!” is making its rounds again on Social Media for being recognised as an official word by the Oxford English Dictionary (OED).

You may have seen your friends share this “recent” news, but did you know it’s been in the dictionary for five years! Aiyo!

‘Aiyo’ recognised by the Oxford English dictionary since 2016

A quick Google search shows the website Singapore Uncensored describing it to be “most commonly used in Singapore, Malaysia and parts of Asia”.

A further search found ‘Aiyo’ and ‘Aiya’ derives from the Chinese words 哎唷 (aiyo) and 哎呀 (aiya) which are similar to “oh no” or “ouch” in English.

Although the interchangeable word for Aiyo – ‘Aiya’ is not officially recognised by the dictionary, native Chinese speakers are describing it as an ‘expression of life’ and used to express dismay, exasperation or surprise.

What does the Oxford English dictionary say though?

Officially, it is described by OED as a South Asian (in southern Indian and Sri Lankan English) way to express distress, regret, or grief.

While the sentiments of the expression ring true to both South Asia, South East Asia and East Asia, we’re going to go ahead with the certified true version of the word and its origins.

Newser describes Aiyo as being common to the major Dravidian languages of Southern India: Tamil, Malayalam, Kannada and Telugu. It is said to be connected to the Hindu God Ayyapa and the wife of the Hindu God of Death – Yama.

The Indian Express report that it first reached an English audience in 1886 via London based publication Chamber’s Journal – a magazine founded by William and Robert Chambers.

With Malaysia being a multicultural country, it’s no wonder Aiyo is known as an expression that sees no boundaries.

It may have taken over 130 years for Aiyo to be officially recognised as a word by OED but for many of us in Asia, it’s one word for all occasions and simply needs no introduction because if you know, you know.