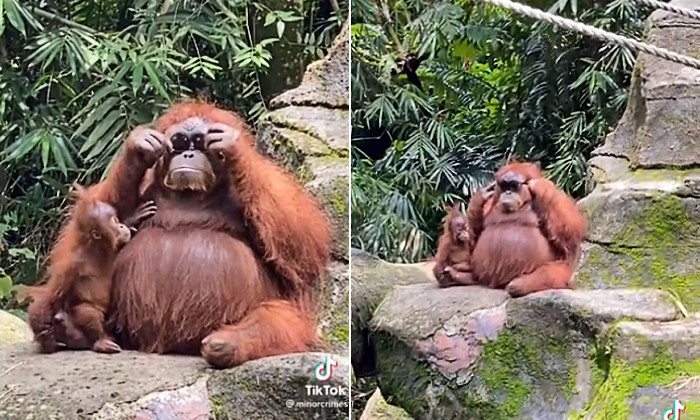 The internet recently swung with joy when footage of a ‘mama’ orangutan modelling a pair of sunglasses found its way onto cyberspace.

A one minute clip posted by TikTok user Lola Testu had captured the curious ape rocking the shades after it accidentally fell into its enclosure at the Taman Safari Indonesia animal theme park in Bogor.

“Oh no it’s broken,” said a voice in the video when mama went to pick the glasses up

But surprisingly, with a baby in its arms, the mama orangutan had instead made the sunglasses her own – trying it on is several different fashion.

Even the baby orangutan tried to get its hands on the item, but was turned away by the mother before she was seen flinging it back supposedly at the owner who dropped them in exchange for some treats.

Obviously, people were losing their minds over the animal’s antics which made mama orangutan an instant celebrity.

I’m losing my mind over this pic.twitter.com/j7Zpq3qT3s

sunglass orangutan just means a lot to me pic.twitter.com/7wzXRtiuUx

The team at Taman Safari Indonesia Bogor works closely with orangutans as part of the nation’s conservation efforts.