Carl runs a fashion business with his wife, and holds motivational seminars. 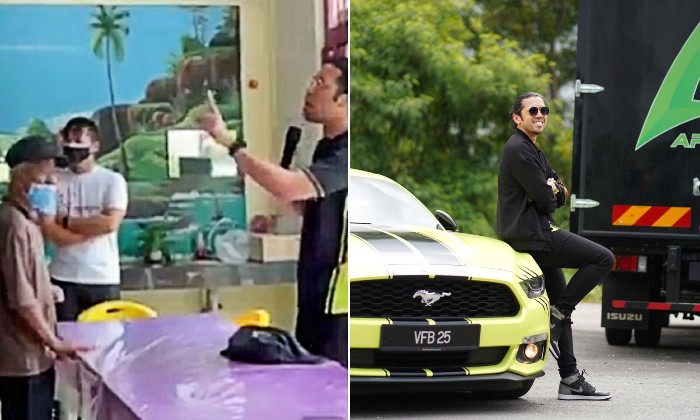 Malaysians had a bone to pick with local entrepreneur and financial guru Khalif ‘Carl’ Samsudin who’s accused of being insensitive and rude towards the homeless.

A video posted and later deleted by Carl on Instagram had recorded his interaction with an elderly Pakcik at the Kuala Lumpur Homeless Transit Centre.

How old are you? 64? I ask you this, do you regret not being serious in your youth? Do you regret playing around when you were younger, not taking things seriously, being lazy? Do you regret that?

Carl later asked the crowd whether they wanted to grow old, filled with regret and said “Have you ever wished one day, it doesn’t matter what religion you are from, you pray to God. God show me the way I want to change my life. What if God sent me to help you guys?”.

Comments online showed netizens were generally displeased by Carl’s behaviour in the video.

Maybe God sent you to him, but have you ever think, that maybe God actually sent him to you?

Awak tahu ke kehidupan Pakcik tu sebelum ini?
Awak di sisinya selama bertahun-tahun yang lepas?
Even so what gives YOU the right to berate another human being
Maybe I am not getting the complete picture.
Please correct me. To “Carl Samsudin” I hope “God” sends you this message pic.twitter.com/GPVODF2rTT

Carl is known to run a fashion brand called Bella Ammara with his wife Sharifah Nabilla ‘Belle’ Al-Yahya Syed Shah as well as his own business and marketing motivational seminar.

With the negative comments being thrown in his direction, Carl’s lawyer, Emma Sakira reportedly said that the public had misinterpreted the video and that people were gunning to damage her client’s reputation.

They recorded the video and took a clip of him (Carl) giving a spirited motivational talk. He wasn’t being insulting but giving encouragement.

The lawyer explained that Carl had been invited to provide a motivational talk entitled ‘Ubah Hidup’ or ‘change your life’ to 20 homeless people present at the transit centre on Tuesday (27 July).

Emma said her client would be making a police report on Thursday for the defamatory video.

With scenes from the video going viral, Carl was apparently fined for not wearing a face mask during his visit to the homeless shelter.

Dang Wangi Police Chief Mohamad Zainal Abdullah confirmed that a compound of RM1,500 was served to Carl on Wednesday.

Apologising for his actions, Carl later went on Twitter to explain what had happened.

In regards to the recent viral video. I never intended to insult anyone, especially the uncle. All my life I have never been rude to anyone, especially the elderly. I try my hardest to respect everyone. My life’s mission is only to help, be useful and change the lives of those in need, besides being a servant of God. Honestly, before, during and after I finished talking, I had been polite with the uncle and all the other homeless people and they were happy that day.

Carl said that the elderly uncle seen in the video had volunteered when asked to share his story and the regrets that he may have throughout his life.

I was enquiring from the uncle and based on his answers I shared it in a spirited manner to the others. If you watch the video carefully, you’ll see what I was trying to convey.