The one thing you can count on is Malaysians’ sense of humour. 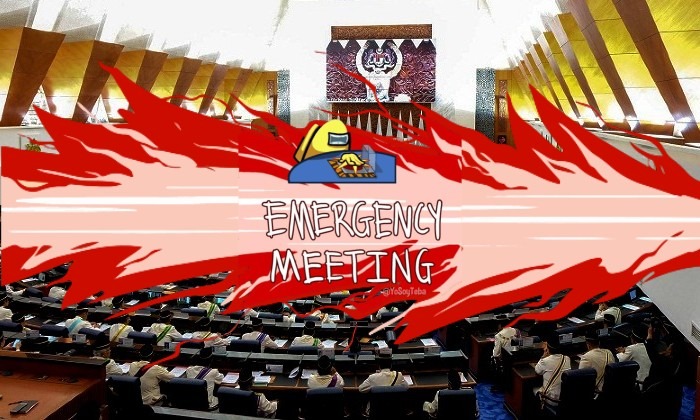 The Yang di-Pertuan Agong, Al-Sultan Abdullah Ri’ayatuddin Al-Mustafa Billah Shah dropped a bomb on the fourth day of the Special Parliamentary Meeting, claiming that he never consented to the Emergency Ordinances being lifted.

His statement triggered a ruckus in Parliament and as MPs and Ministers rushed to figure out how to move forward, new Covid-19 positive cases in Parliament were detected, triggering a lockdown.

Additionally, some Ministers left Parliament during the recess, but before the lockdown, and rushed over to the house of Prime Minister Tan Sri Mahiaddin Md Yassin, who was not present at Parliament due to unspecified health reasons.

READ MORE: [Just In] Agong Says Has Not Consented To Emergency Ordinance Being Revoked

As the panic and confusion continued in Malaysian politics, on social media Malaysians turned to jokes and memes, as we are wont to do during any moment of national crisis.

Ernest Ng, a popular cartoonist, equated the entire fiasco to the popular game DOTA, likening what Parliamentary Minister Datuk Seri Takiyuddin Hassan had done to “throwing the game” by claiming that the Emergency Ordinance were cancelled, without the Agong’s consent, essentially sabotaging his own team.

Taki throw game.
Leading at 70minutes with mega creeps and he jumped in and chrono his own entire team.
Now kena team wipe, rapier dropped, nobody got buyback.
If Malaysian politics was DOTA.

Comedian Mikhail Svrcula referenced the whole situation to the Netflix show Tiger King, which ramps up the drama in extremely rapidly in various outlandish ways.

Malaysian Parliament is the Tiger King of 2021

Even MPs themselves managed to find the humour in the issue.

I was asked by YB @FuziahSallehMP (PKR Kuantan) to comment about today’s event on her facebook live.

I told her, if there is an Olympic event called Parliament Gymnastics, Malaysia had won a gold medal today. https://t.co/d93q5jXsiI

For the time being, Parliament is suspended and will only resume next Monday due to these unforseen circumstances and Covid-19 scares.

Government Won’t Appeal Against Undi 18 Order, Will Implement By End Of The Year, Says Law Minister

Malaysian MPs Made Into 8Bit RPG Characters: See How They Rank

“Whoever Wins Must Work With The Other Side,” Agong Told Political Leaders Yesterday