Our MPs still seem to have trouble wearing their masks properly, even in parliament. 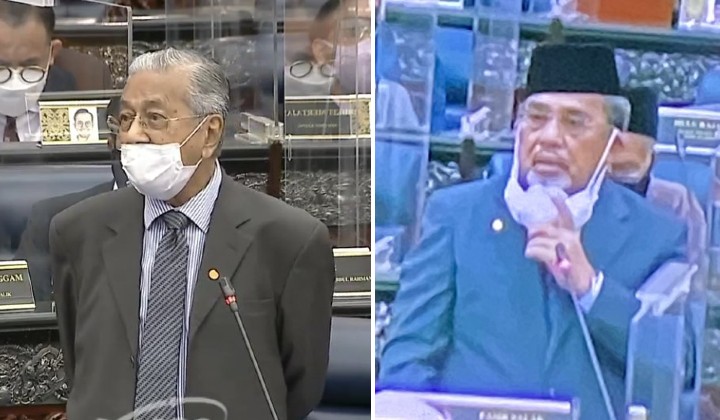 Today, 26 July 2021, members of the parliament came together for a Special Parliamentary Seating to discuss the state of the country and our fight against the pandemic.

However, as the MPs gathered to determine the fate of Malaysia, more netizens were shocked to see many of our representatives breaching SOPs by wearing their masks wrongly.

gobind looks like using double disposable. actually should be using disposable inside and cloth mask outside to tutup the sides. the point of double mask is improving fit not improving filtration. next to him i dont know who he is but his nose is exposed which is obviously wrong pic.twitter.com/gDevXCLCn2

Netizen Paul Tan began to keep track of ministers who were wearing their face masks incorrectly, complete with tips on the correct way to wear them.

Shockingly, even former Prime Minister Tun Dr Mahathir Mohamad was seen with his whole nose sticking out of the mask, which is worrisome as not only is he 96 years old this year, but also because he used to be a practicing doctor and should be familiar with wearing face masks.

Dr M furiously flaying the government’s Covid-19 response, and how the Sabah election saw cases rise to 2k, then the emergency to 6k, then NRP to 9k, and now 17k.
But uhh, Tun, that’s not how you wear a facemask. pic.twitter.com/g8dDQOxmj4

Pasir Salak MP Datuk Seri Tajuddin Abdul Rahman wore his mask on his chin when it was his turn to speak.

The beloved Kota Raja MP Mat Sabu disregarded the need for a mask completely as well.

Although members of the parliament were one of the earliest groups to receive their vaccinations, it does not mean that they are immune to Covid-19.

Since this is the first parliamentary sitting since the State of Emergency was announced, TRP strongly hopes that there won’t be a Parliament cluster in the next two weeks.