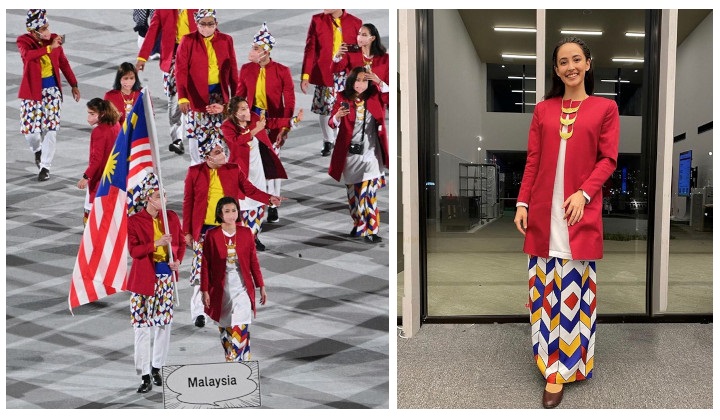 Aside from artistic displays of sound and visuals representing the host country, the Olympics Opening ceremony is also a time for constituents from other countries to rally their national pride in something that is not athletic attire.

While Team USA was decked in a well-known fashion brand Ralph Lauren and Team Japan in one of their country’s largest fashion retailers Aoki, Team Malaysia took the humble route with designs done by the Faculty of Art & Design at Universiti Teknologi MARA (UiTM) Shah Alam.

About 2-hours and 19-minutes into the 4-hour opening ceremony welcoming over 200 nations, the Malaysian constituents walked in with the female athletes wearing a baju kebarung (a combination of both the kebaya and kurung), while the male athletes and officials wore the traditional baju melayu complete with the tanjak (headgear), a design that was inspired by the legendary warrior Laksamana Hang Tuah.

The colours of the attire were adapted from the Jalur Gemilang, Malaysia’s national flag.

What stood out the most? The geometric patterns on the sarongs which one TRP writer said reminded them of Composition with Red Blue and Yellow, a 1930 painting by Dutch artist Piet Mondrian.

A mixed bag of comments

Comments by netizens on social media about what the Malaysian team wore ranged from “beautiful” to “fugly”.

Celebrity chef Datuk Chef Wan also took to social media to outwardly voice his opinion saying it looked “cheap” and asked why they looked like “clowns”.

In his Instagram post from yesterday (24 July), the outspoken 63-year-old said that since the event is held every five years, more effort should have been put into the design by giving local designers the chance to propose their ideas and Malaysians to vote for their favourite.

Fashion statements aside, Chef Wan is still proud of the team and wishes them the best while praying for their safety and health too.

“How Does She Afford It?” Netizens Wonder How UiTM Student Afforded First Class Flight