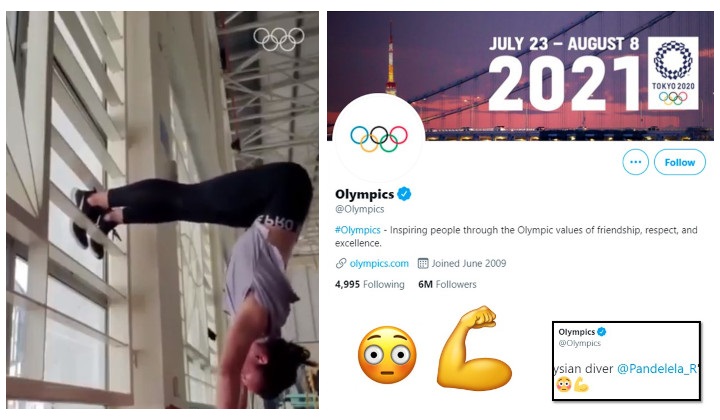 The Tokyo 2020 Summer Olympics is right around the corner and their official Twitter is on overdrive highlighting what’s happening behind the scenes at the sporting world’s most celebrated event.

In their post on 22 July, Malaysia’s very own Pandelela Rinong was featured with a short video of the two-time Olympic medalist training hard with a caption by the committee saying her workout is “no joke” followed by the flushed face and flexed muscle emojis.

The two-time Olympic medalist is hoping to add to her collection at #Tokyo2020.#StrongerTogether pic.twitter.com/iayDv47E29

The post has garnered tremendous support from Malaysians, with many commenting about how proud they are of her and giving her words of encouragement to bring home the medals.

Some comments were also made about her spectacular core muscles with one person describing them as being “as strong as steel”.

In the video, Pandelela was shown doing core-heavy wall and staggered push-ups, important workouts as having a strong core is extremely important in diving.

She also won the Silver medal in the 10 m synchronised platform with Cheong Jun Hoong in the 2016 Summer Olympics in Rio, Brazil.

Diving at the Olympics 2020

The Olympics 2020 in Tokyo officially kicks off today (23 July) with diving competitions set for:

Read More: “Beacon Of Hope” For Malaysia To Bring Home Gold At The Olympics