Police went to his home to bring him in after he posted the video online, and he Facebook-lived that, too. 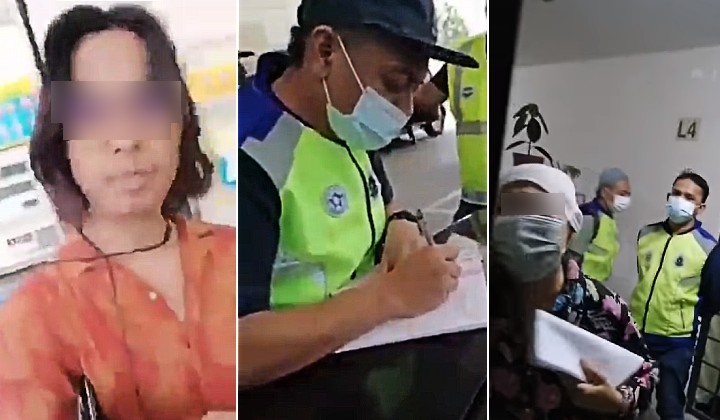 A series of videos recently captured and released by a man who refused to wear a face mask in public, allegedly provoked on-duty police officers and interfered with their work is getting viral attention on social media.

The 29-year-old insurance agent was caught without a face mask while he was pumping petrol at a station in Sri Damansara, Petaling Jaya.

The suspect had claimed to have read somewhere that wearing face masks can cause bacterial infections.

“I’m being apprehended by the police just for not wearing a face mask at a petrol station… Abang (are you) the police or Abang (are you) gangsters?”, said the man in the video as he argued over Covid-19 standard operating procedures (SOP) with officers who proceeded to write him up with a ticket for his violation.

After receiving his fine, the man later continued to rant for a couple of minutes in his video on how he was still in the right.

They want to saman me? I just went to f*cking pump fuel, didn’t even went inside the shop, paid with Touch’n’Go and that’s a problem?

Apparently, when asked if he had been inoculated for Covid-19, the man replied that he doesn’t want to be vaccinated – believing it was dangerous to do so after personally researching about it.

It is said that the man had also asked the police officers to conduct their own research on the supposed hazards of the coronavirus vaccines.

Reportedly, police had later gone to the man’s home in order to bring him in for questioning, during which, he proceeded to record another video supposedly attempting to negotiate his arrest.

As many as four PDRM officers were shown outside the man’s home along with persons believed to be his parents.

The suspect was arrested, remanded and investigated under Section 188 and Section 504 of the Penal Code for disobeying orders carried out by a public servant and intentionally insulting and causing provocation to others.

He was also charged under Section 233 of the Communications and Multimedia Act 1998 (Act 588) for the improper use of media devices to knowingly “comment, request, suggest or other communication which is obscene, indecent, false, menacing or offensive in character with intent to annoy, abuse, threaten or harass another person.”

Burger Lovers Get To Taste In-N-Out In PJ For One Day Only!