There is a good reason why the ”fragrant” fruit costs so much. 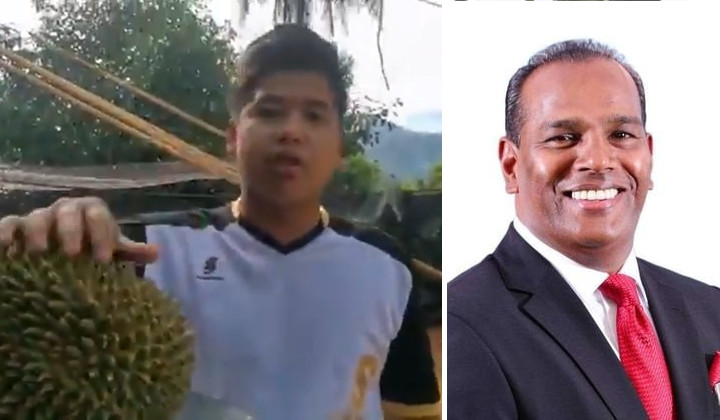 The term ‘durian runtuh’ and windfall share the same meaning, although both terms refer to different fruits. Both could either mean a fruit, that the wind has blown down from a tree, or an amount of money that somebody receives unexpectedly.

Wan Mahussin Wan Zain experienced both recently when a durian dropped on the rear window of his car and punched a hole through it.

Unfazed, Wan Mahussin later posted a video of him and the “special” durian on social media, saying that it’s up for sale for RM500.

He explained that the price is ‘special’ because the durian kampung has never touched the ground. Also probably because that’s the estimated price of fixing the broken rear car window.

He did the video as a lighthearted way of sharing what has happened to him. After all, he can’t blame the tree, the fruit, or the wind for the unfortunate accident.

His post caught the eye of Human Resource Minister, Datuk Sri M. Saravanan Murugan who offered to buy the fruit for the asking price.

However, Wan Mahussin had already eaten the fruit, probably because he never thought that anyone would take his video seriously.

Although the fruit is gone, the Minister asked Wan Mahussin for his bank account number and gave him the RM500. In return, Wan Mahussin said that he would help others with what he has been given.

At the same time, he also posted that he has been offered to become one of the two brand ambassadors for Durian Mochi.

Who is this Wan Mahussin?

Although this ‘durian runtuh’ incident seems to be random, Wan Mahussin is not just a random person.

He is an entrepreneur and the Student Vice President of the National Coalition of Peninsular Malaysia Students (GPMS). He is also active on social media and is no stranger to doing activism and social work.