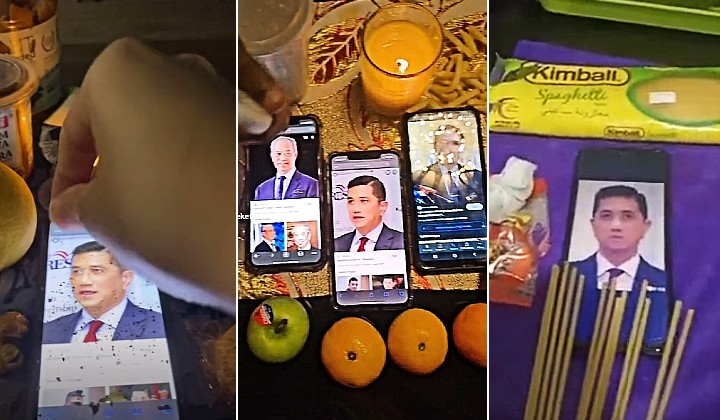 International Trade and Industry Minister Datuk Seri Azmin Ali and others became the target of a bewitching new trend on TikTok.

A string of clips had materialized on the video-sharing platform depicting netizens supposedly conjuring hexes, jinxes, curses and all manner of magic on the Gombak Member of Parliament (MP).

Read More: TIL That Black Magic “Susuk” Charm Needles Are Real And Show Up On X-Ray Scans

From mosquito repellents to eleven herbs and spices, the trend saw content creators playfully casting their dissatisfaction towards the Minister’s photographs as spooky music plays in the background.

Netizens claim that their performance was a last-ditch attempt at putting an end to the Covid-19 crisis.

Many point fingers at prominent figures for the rise in infections and allowing factories to operate during lockdowns.

Azmin had previously explained that it was unfair to blame the manufacturing sector for contributing to Covid-19 outbreaks.

According to the Minister, data from the National Crisis Preparedness and Response Centre (CPRC) showed that the manufacturing industry only contributed to 9.3% of infections detected between 1 to 23 June.

Citing the Health Ministry (KKM), Azmin said that 75% of new infections found nationwide were sporadic cases and are linked to various sectors and activities.

He also mentioned that workplace clusters on average contributed between 5% to 10% of new Covid-19 cases.

On a similar note, the Federation of Malaysian Manufacturers (FMM) President Tan Sri Soh Thian Lai also quoted KKM in stating that the industry only contributed to a fraction of new Covid-19 cases.

Tan Sri Dr Noor Hisham Abdullah, Director-General of Health, was also most recently quoted during an engagement with the business community on July 4, 2021 that of the total cases, close to 70% were sporadic cases. 30% came from clusters of which 62% are workplace clusters. Factories only account for 30% of these workplace clusters. This works out to be around only 6% of the total number of cases that can be attributed to factories