He was later advised against wearing a plastic bag and given a proper face shield. 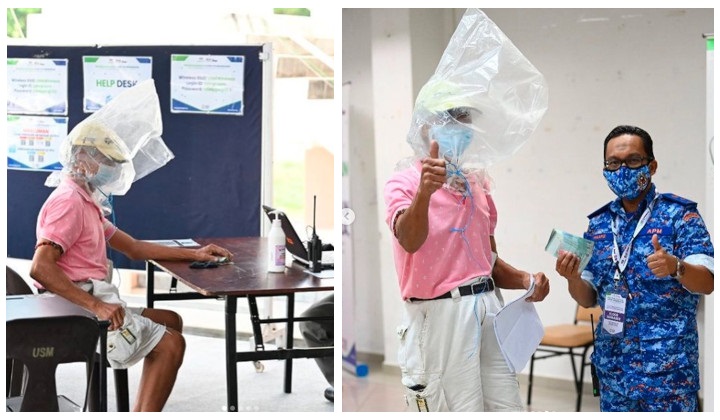 Never judge a book by its cover has never rung so true after reading a post on Universiti Sains Malaysia’s (USM) Instagram.

Featured was a series of pictures of what appears to be an elderly man dressed in a pink polo top and beige Bermuda shorts.

While there is nothing strange about that, it is the clear plastic bag tied around the man’s head that according to the post, drew attention and garnered whispers and sarcastic laughs.

The post said the uncle in the photos came for vaccination at USM’s vaccination centre (PPV) yesterday (8 July) looked a bit “bizarre” at first.

Once he got his jab, he then proceeded to the secretariat and what he did left everyone shocked.

“The frontliners have been working very hard. Please buy them lunch” said the uncle, and handed them a large sum of money.

He then left in the same taxi he came in, leaving everyone there to witness his generosity stunned.

The post has since received 8,684 likes with comments filled support and heart emoji’s. Reading the post even made some netizens cry while one person said we don’t deserve him!

All in all, his good deed was inspiring and much needed after a difficult week.

In case you’re worried about the kind uncle’s safety with ventilation, he was advised to remove the unconventional ‘protection’ and was instead provided a face shield by health professionals on duty.