KKM later removed the post denying the crowd but insisted that there were still less than 1,500 people at the CAC in Shah Alam. 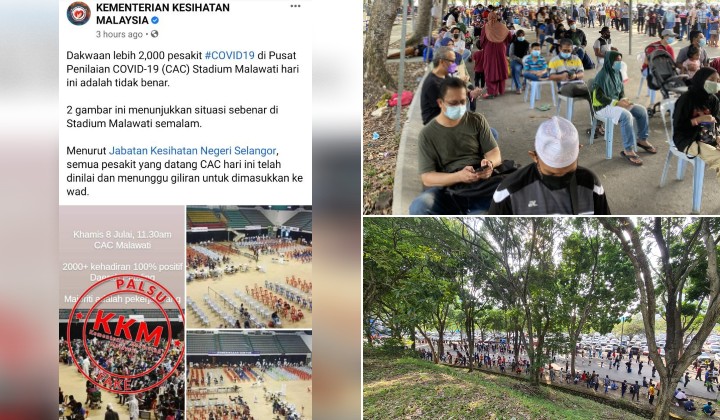 In a posting dated 8 July, KKM had issued a statement denying rumours that a crowd of over 2,000 Covid-19 positive patients were present that day at the Stadium Melawati Covid-19 Assessment Centre (CAC) in Shah Alam, Selangor.

People who attend the CAC are those who have tested positive for coronavirus, examined and assessed to see if they needed to be placed under home quarantine or sent off to either receive treatment at the Covid-19 Low-Risk Quarantine and Treatment Centre (PKRC) or be hospitalized.

Included in KKM’s posting were two images of an uncrowded CAC hall placed in contrast to another picture of the hall packed with people.

According to KKM, the Selangor State Health Department (JKNS) had stated that everyone attending the CAC have been assessed and were waiting their turn to be warded.

Netizens, however, came to debunk KKM’s statement – suggesting that it was fake news.

Members of the public claiming to have either been to the CAC or those who were there on-duty as frontliners and volunteers argued that there had indeed been large crowds present at the CAC on Tuesday.

Many had included pictures that showed a substantial number of people queuing up inside the CAC hall as well as lines extending outside the stadium.

People also claimed that the CAC had been packed full of people for the entire first week of July.

Even Subang Jaya Assemblywoman (ADUN) Michelle Ng Mei Sze weighed in on the matter, stating that she witnessed the same crowds there at 9 am.

The ADUN also attached pictures that had been taken by her secretary which showed a large queue of people waiting on stadium grounds.

After a massive public response, KKM later removed the posting from its social media channels saying that they had been provided with inaccurate information.

A KKM spokesperson told Malaysiakini that JKNS had given out incorrect details regarding the date and time of the photographs taken at the CAC.

However, the spokesperson insisted that the crowds present at the CAC had been less than 1,500 people instead of the 2,000 that had been claimed.

The retracted statement, however, didn’t stop people from expressing their disappointment towards KKM and voiced doubts over its ability to distribute accurate and transparent information.

Some, like Civil Rights Lawyer Syahredzan Johan, are also asking the Health Minister Datuk Seri Dr Adham Baba and Health Director-General (DG) to clarify to the public about what was going on.

Darul Ehsan Facilities Management Sdn Bhd (DEFM) Manager and CAC Facilities Coordinator Ahmad Sayuti Bashiron had previously confirmed that the centre had received a significant increase in the number of new admissions in the past two to three weeks.

This response came after a video showing a crowd of Covid-positive patients lining up outside the CAC went viral. Ahmad Sayut confirmed that more than 1,000 people were present there when the video was taken.

He estimated that the CAC had conducted its most number of assessments since February and that they were seeing more and more foreign factory workers arriving at the facility.

The state of Selangor remains the epicentre of the Covid-19 pandemic in Malaysia having identifed over 10,000 positive cases in the past two weeks.

As of 8 July, a total of 272,993 infections have been recorded in the state since the start of the pandemic.