Although many Singaporean and Malaysian dishes may have the same name, they often aren’t the prepared same way (ED: and Malaysia’s are better). 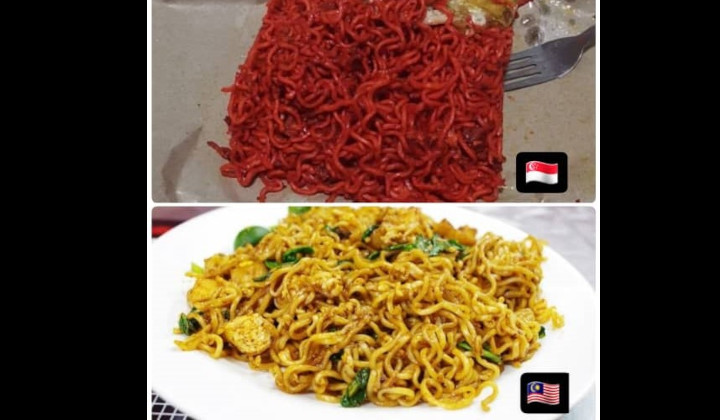 So close yet so far away from home, a Malaysian man ‘stuck’ in Singapore due to border closures was in for a surprise when his order of Maggi goreng turned up not quite how he envisioned it.

Derrick Yeo took to social media in a Facebook post with an image of what appears to be red Maggi noodles with a side of egg.

The caption accompanying the picture roughly translates from Chinese to English as “I ordered Maggi goreng here (Singapore) for the first time. I didn’t know it would look like this. I’m never buying this again.”

However, according to Mothership SG , the sauce that contributes to the red coloured noodles is known to be homemade to enhance the flavour.

A stall owner had revealed previously that the red colour gives the impression the food is spicier than it looks.

In Derrick’s defense, he didn’t say the red version of the Maggie goreng wasn’t nice, just that its appearance shocked him. In fact, he went back to the same stall and asked for the noodles to be cooked “Malaysia style” and it turned out just as he expected.

Derricks post, that has since received over 2,000 reactions and close to 800 comments, had a lot of Netizens amused with some highlighting how it’s done differently in Singapore.

Food refresher for Malaysians in Singapore (and vice versa)

On that note, here’s a quick refresher of some popular foods in both Malaysia and Singapore that go by the same name but are different in style.

As a Malaysian living in Singapore, one of the things I craved most was nasi lemak the way it was prepared in Malaysia. I longed for the traditional preparation of coconut rice, sambal chili, fried anchovies (ikan bilis), peanuts, cucumber, hard-boiled egg, and with the option to add your favourite protein like fried chicken berempah style.

Upon ordering a nasi lemak in Singapore, I was taken aback when I received chicken hotdogs, fishcakes and luncheon meat as a choice for my source of protein.

The char koay teow most Malaysians know and love is Penang’s style made of flat rice noodles stir-fried with shrimp, cockles, eggs, and beansprouts.

To my surprise, upon ordering char koay teow in Singapore, I actually got a mix of flat rice noodles AND egg noodles. I actually thought at one point I was getting the best of two different noodle dishes.

There are several different kinds of laksa in Malaysia like assam laksa, laksa Johor, and Sarawak laksa. By default though, I think of Penang assam laksa when ordering laksa. It is a combination of blended mackerel fish and tamarind poured over thick white noodles with condiments like cucumber and chili to top it off.

When in Singapore though, the default laksa is coconut-based, sweeter and flavoured with dried shrimp.

All in all, good food is the kind food that puts you in a good mood. Let’s not make it an issue and just enjoy our differences!