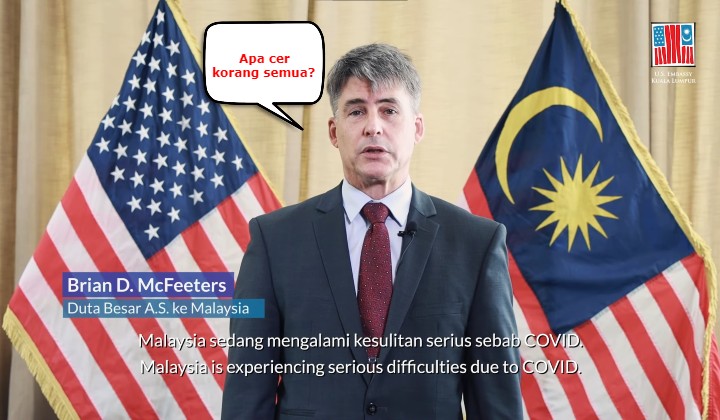 Alright look, we already know what some of you are going to say… As soon as a random foreigner speaks even a hint of Bahasa Malaysia (BM), the whole country goes into a fit of unbridled hysteria.

But, no one can deny the fact that this one Mat Salleh from America does deserve credit for his way with Malay words.

Malaysians were super impressed by how fluent the new United States (US) Ambassador to Malaysia, Brian McFeeters, can speak in our local tongue.

A video recently released by the US Embassy had featured Brian addressing the nation in full BM.

In his speech, the ambassador had talked about the US’s public health partnership with Malaysia in the fight against the Covid-19 pandemic, where the country is donating vaccines, personal protective equipment (PPE) and computers worth RM1 million to the National Disaster Management Agency (NADMA).

Brian D. McFeeters began his service as the US Ambassador to Malaysia earlier in February 2021 and has spent some 15 years working as a foreign diplomat in Southeast Asia.

Besides having spent his career working in countries like Indonesia, Iraq and South Korea, the ambassador is known to be adept in several languages including Indonesian, French, German and Spanish.

People even began making proud historical reference to when BM was once considered the ‘lingua franca‘ or the main language of communication used in Southeast Asia back in the 14th to 18th century – adopted and spoken by Arab and Chinese traders as well as by the Dutch and British colonials that came to conquer us later on.

Multilingualism or the use of more than one language remains an essential factor in harmonious communication and relationships among nations besides functioning as an important bridge for tolerance as well as increased participation and dialogue from various peoples across the globe.