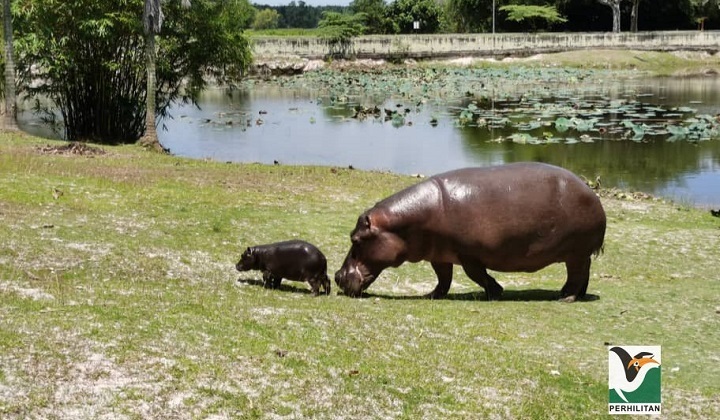 Who doesn’t love baby animals? Recently the Wildlife and National Parks Department (Perhilitan) shared photos of mummy hippo, Cendana, heading out to the lake with her newborn baby.

She was seen teaching her calf how to forage for food, get around, swim, and acclimate to life at Paya Indah Wetlands, in Dengkil, Selangor.

The gender of the calf has not been identified, and it has not been given a name yet. But, it seems the rangers at the park are fond of calling it, ‘Comel’.

Cendana was one of the four Nile hippos (Hippopotamus amphibius) that were gifted to Malaysia by the Government of Botswana back in 2001. Two were male and two were female.

The other female hippo, Juwita (a 21-year-old cow), is currently residing at ‘The Lost World of Tambun’ in Ipoh.

In April, she was paired up with Jiwang (a bull between 8 to 10-years-old). It took the park five years to find her a mate.

Although the relationship had a rocky start, now her caretakers have high hopes for the couple.