Although Raya is over, here are a few of our favourites from Aidilfitri 2021. 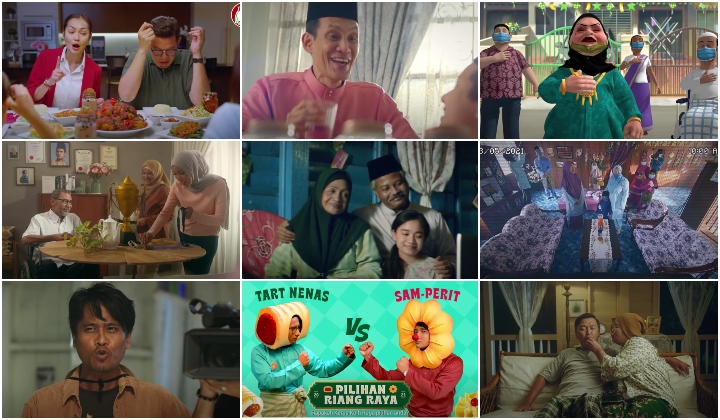 Raya was a little different this year since we couldn’t go visiting, but one thing that stayed the same was Malaysia’s tradition of a seasonal barrage of Raya ads designed to tug at our heart strings

So, although Raya is over, here are a few of our favourites from 2021.

In a short 5 minute animated musical called ‘Syukur Raya’, Petronas highlights the importance of being kind and forgiving to our neighbours.

The main character, Poji can’t go home for Raya this year and misses his mother. Poji  also deals with his fierce neighbour Mak Jah but tries to make himself useful anyway.

This short film is about a boy named Amin who refuses to go to school after being bullied at his last school. He then strikes up an unlikely friendship with his next-door neighbour which inspires him to want to go back to school.

Fearing they don’t have time to shop for their new clothes for Raya this year, a son asks his father to take the family shopping.

In a comical gameshow parody, the father and son are asked by the mother and daughter questions which most men might find a little hard to answer.

In a brief 3 minutes Maxis, in collaboration with Shopee, presents a delightful story called ‘Raya Si Sakan.’ It’s the tale of an enthusiastic wife who does things for her husband only to be disappointed by his responses.

A 3 minute presentation entitled ‘Seerat Jalinan Semesra Ikatan’ tells the story of a young woman named Kalsum who is neighbours with Mak Timah. Kalsum, being a nosy neighbour, expresses her pity for Mak Timah because the latter is always alone.

She became quite concerned because Mak Timah had begun to talk to herself day and night. Rallying the kampung to come visit Mak Timah with food for Raya, she discovers the truth.

In a short 3 minute story, called ‘Tradisi di hati, setia di sisi’, we follow a young boy named  Yusof as he goes about his day with his father on a quest to make rendang with fresh ingredients.

Yusof laments that his father doesn’t like to take shortcuts and insists on doing things the hard way. The final twist at the end is a real tearjerker though.

The ad was lauded on social media for breaking the fourth wall and gender stereotypes, but also poked fun at nosy aunties always asking when young people are gonna get married.

In a 4 minute story called ‘Demi Masa’ we follow the story of Julia, a young girl who has a fall then has her father take care of her. Years later, Julia now all grown up, received a phone call that her father has had a fall and is rushed to the hospital.

A short 1 minute clip, we follow the story of a family with a mother who is over-enthusiastic about Raya and forgets about buka puasa.

In a comical presentation entitled “Siapakah Ketua Kuih Raya 2021” a mock newscast is presented regarding two political candidates in the form of a pineapple tart and a sam-perit, both vying for leadership as the winning kuih raya.

In a 5 minute short film entitled ‘Cahaya Syawal’, we follow the story of a worrying mother in Ramadan, with a front-liner daughter who is a nurse not being able to come home for raya.

Enjoy the ride in this 5 -minute video about a somewhat strict mother who is particular about everything – especially when it comes to Raya preparations. Notice how she measures everything with a ruler?

A front liner’s work is tough as you’re always on-call even when you’re not. This is Suraya’s journey and why she was late on the way to break fast with her friends after work.