Malaysians are advised to stay at home unless for emergencies. 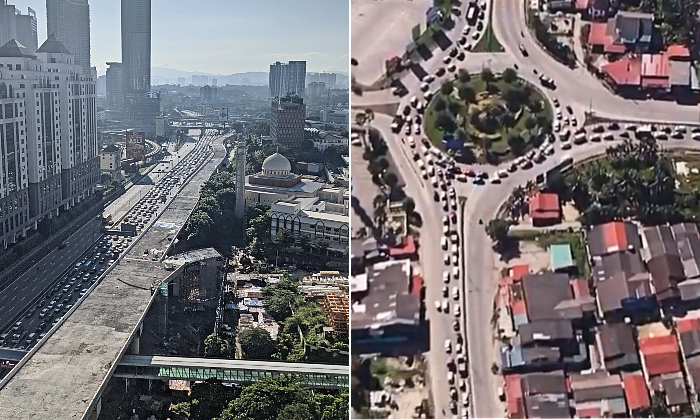 “It’s every driver’s worst nightmare,” are the words that best describe the terrible traffic congestion happening in the Klang Valley and other parts of the country this week.

As the nation settles in for what many are now calling ‘MCO 3.0’, Malaysians have been making daily traffic updates revealing the massive jams that have been occurring in their areas.

Images and videos shared online saw an ocean of vehicles, stretching out as far as the eye can see.

The traffic from #KL to #Selangor. Gridlock as far as the eye can see in the Federal Highway! #MCO #MCO3 #PKP pic.twitter.com/lv0HG7PyDc

According to reports, roadblocks were set up near the famous green Selangor-KL border arch – where the four-lane highway was reduced to two – and authorities have been checking to see if people have valid travel documentation.

Some road users claim that they were stuck in the Federal Highway jam for more than an hour on their way to their destinations.

Authorities report that Malaysians have been taking a chance to ‘balik kampung’ despite the strict orders against interstate and interdistrict travel.

According to the Malaysian Highway Authority (LLM), movements heading towards the east coast of the peninsular have been steadily increasing.

Terengganu Police Chief Traffic Datuk Roslee Chik said that traffic heading into the state had increased by 25% as the nation inches closer to Hari Raya. Most of the vehicles entering the state are confirmed to be travelling from Selangor, KL, Pahang and Kelantan.

Meanwhile, Kelantan Police Chief Datuk Shafien Mamat revealed that there were more than 1,000 vehicles that were turned away and forced to turn back from the state border for trying to enter the state without proper documentation and permission.

Detailed inspections found that they did not have the appropriate documentation, falsified documentation and there are also those who try their luck to enter Kelantan.

Footage captured from the air also supposedly showed the level of congestion happening in Kelantan as of late.

Drone image of jam in Kelantan.

And its not even hari oghe wat ttupat lagi, if U know what I mean. pic.twitter.com/Dfk6p0YZ5e

It appears that the traffic jams are not just limited on our roads and highways,

Videos shared on social media captured the crowded conditions outside of the Aeon mall in Seksyen 13, where people were said to have gathered to do their Hari Raya shopping before MCO 3.0.

Many shared their health and safety concerns regarding the scene and criticized those who refused to abide by SOPs.