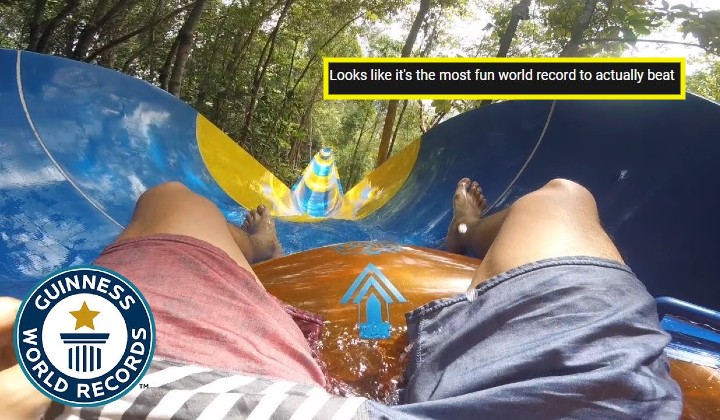 Penangites have the envious pleasure of literally possessing the world’s longest tube water slide. Now the Malaysian experience is making a splash with the Guinness World Records’ global audience!

In the video, footage of sliding down the 4-minute long ride is shown with all its speed changes as well as twists and turns along the lush foliage in an almost ASMR-like manner.

With nearly 60,000 views at the time of writing, viewers were largely impressed by the 1.1km long ride by theme park operator SIM Leisure Group.

“Looks like it’s the most fun world record to actually beat,” wrote one commentator, while many others reminisced on the good old days when going to the water park was a fun, safe thing to do before the pandemic hit.

A number of Malaysians flooded the comments as well, taking the opportunity to showcase their pride and support.

Many Malaysians may have already been aware of this jaw-dropping waterslide as it made headlines back in 2019. But here’s a quick refresher.

On 25th September, theme park operator SIM Leisure Group received a Guinness World Record certificate from an official adjudicator for the 1,111 metre water slide, that’s nearly thrice as long as the previous record of 356 metres held by the Galaxy Erding in Germany.

As seen in the YouTube clip, the record-breaking slide meanders through the rich rainforest of Teluk Bahang on Penang Island.

Riders take a cable car chairlift uphill to the slide entrance which is elevated 70 metres from the bottom of the hill. The slide is monitored by attendants and CCTV cameras along it.

Why create such a long ride?

Well, CEO of Sim Leisure Group Sim Choo Kheng simply wants to live in the moment as long as possible!

The idea of this water slide came about over frustration that most fun rides and water slides last merely a few seconds, and having the water slide start on a hilltop at a 70-metre elevation would make this ride last a good few minutes.

The entire project took almost two years to complete from conception, in addition to over 8 months of installation.

In a bid to leave minimal damage to the trees surrounding the park, heavy machinery was not deployed. Construction was instead carefully done manually using scaffolding and chain hoists.

The design ensured no trees were cut down in the creation of the water slide. Throughout the installation process, many changes were made due to the hostile terrain and to meet safety and regulatory compliance.

If you’re keen to check out the ride for yourself, the theme park currently open during the Conditional Movement Control Order (CMCO) in Penang. This is however limited to those currently residing in the state due to the interstate travel ban.

Whether It’s Residential, Commercial Or Industrial, Co-Create Tomorrow & Beyond With EcoWorld