Netizens said that it was normal for Malaysians to be tired from a busy schedule, but most Malaysians are paid way less. 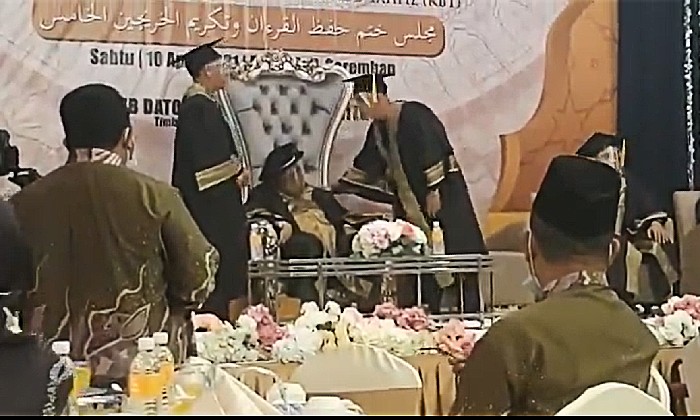 At just over a minute long, the Kuala Pilah MP appeared unconscious for a few moments in the video before being wakened up by people at the event.

As the viral comment nightmare continued to rage online, Eddin Syazlee’s official Twitter account commented with a short statement saying that on the day the video was taken, the deputy minister had been unwell but still insisted on attending the school event.

The same was reportedly said by Eddin Syazlee’s special officer Farahiah Zubir, who also came forward to apologize on the latter’s behalf.

Others also came to Eddin Syazlee’s aid by asking the public to walk a day in a minister’s shoes.

His comments however attracted even more criticism as some social media commenters countered with the fact that other Malaysians are also working for longer hours at lesser pay to put food on the table.

No matter how tired you are, your stomach is full, able to afford fancy clothes, foods & gadgets, pay your bills on time, put gas in your car with your RM50k p/month salary.

Do you think we, rakyat marhaen, can do that with our RM1.2k p/month salary? https://t.co/u5DQeAJoFB

Theres a lot more people who work harder than you, but earn not even half of hour wage monthly.
cut the crap cry baby https://t.co/1d2tSe74kd

awwwww sounds like a normal working person’s schedule. the only difference here is menteris get paid a tenfold 🥰 and marhaens are expected to live with minimum wage on top of no sleep to compensate 🤍 https://t.co/eQnODXiYNU