Bata’s offering retails for just RM39.99, almost RM10 cheaper than rival Fipper’s slipper at RM49.90 and RM40 cheaper than the latter’s collaboration with Neelofah at RM79.90. 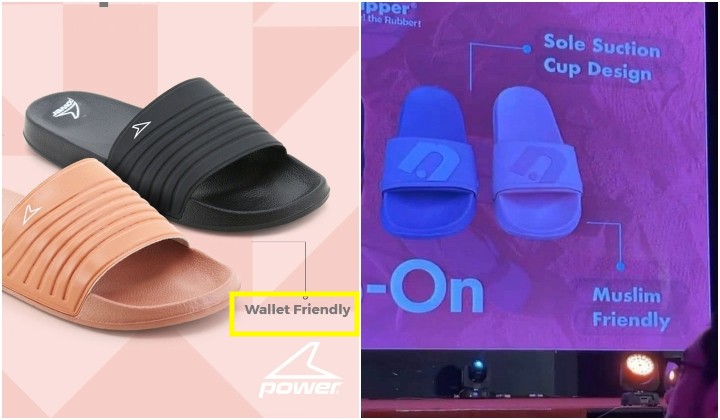 With the ruckus surrounding slippers linked to local celebrity and businesswoman Noor Neelofa Mohd Noor being marketed as “Muslim-friendly”, Bata has decided to strike while the iron is hot and offered its “wallet-friendly” sandals in a cheeky post on social media.

In the Facebook post, Bata reintroduced its Power slip-on sandals which are “friendly to everyone” and retails at a “wallet-friendly” RM39.99.

The not-so-subtle dig was aimed at local footwear brand Fipper which released a controversial RM79.99 “Muslim-friendly” sandal in collaboration with Neelofa. Fipper also sells its own remarkably similar slip-on sandals for just RM49.90.

The pricey Fipper x TheNoor slip-ons were the subject of much ridicule online for its price with many Malaysians accusing Neelofa of commodifying religion for profit.

Shortly after the online brouhaha, Fipper apologised for what it says to be confusion over the “Muslim-friendly” claim. The local footwear brand clarified that the slippers are suitable for Muslim women who wear socks and want to wear slippers at the same time since their previous products were “less suitable with a ‘muslimah’ image.”

This isn’t Neelofa’s first controversy this year though.

The slipper debacle comes shortly after controversy surrounded alleged standard operating procedure (SOP) breaches at her March 27 wedding. This was followed by the newlyweds going on a trip to Langkawi for what they claim are business reasons, but online sleuths pointed out that the couple seemed to be on vacation instead.

Inspector-General of Police Tan Sri Abdul Hamid Bador noted that recent pictures and videos shared by the businesswoman seem to suggest that it is a “free and easy” leisure honeymoon trip instead of a work trip.

She has since responded that she will resolve the matter with the authorities “privately and professionally.”