She’s truly a protector of animals! 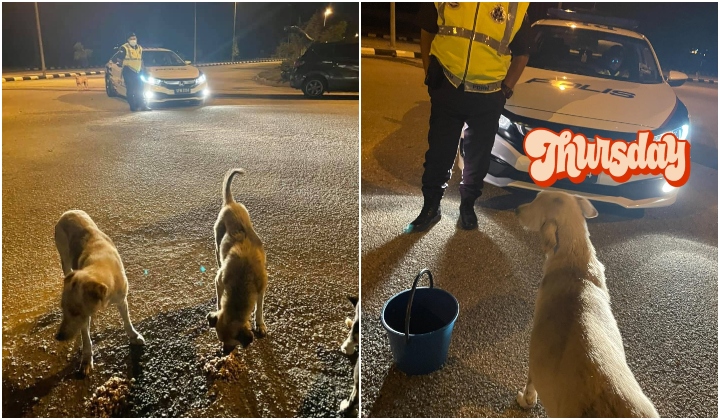 A kindhearted woman in Ipoh, Perak who was in the midst of feeding stray dogs on the streets as usual received a surprise one night when she received an unexpected ‘police protection.’

Nazirah Abd Rahman shared on Facebook that she was in the midst of preparing the dog food when a police patrol car stopped by. A uniformed officer stepped out and asked what she was doing.

When he heard that she was feeding stray dogs, the policeman replied that she was brave and this is the first time he’s witnessing this as he’s afraid of dogs.

Despite his fear though, the policeman decided to accompany Nazirah while she feeds the dogs.

Pictures she shared on Facebook showed the dogs munching away on their meals while the policeman looked on nearby.

He waited for Nazirah to finish feeding the strays and left politely.

The reactions to Nazirah’s post were full of cheer and joy as many were uplifted by the wholesome incident.

But most may not have been aware that Nazirah herself is the harbinger of joy and hope as well.

You see, the 44-year-old dresses up as a clown on weekends to earn money for feeding stray animals and pay for their medical bills!

Her alter ego, Mama Pinky, is a jolly jester who performs and sells brightly coloured balloons of all sizes at a local cafe in Taman Jubilee.

She entertains patrons for two hours every weekend night until 11pm. Then, she hops on her trusty motorcycle and goes for a spin around the streets of Ipoh to feed the strays. Her nights usually end around 1am.

This amazing soul has been rescuing strays for over five years and even has around 50 cats in her home!

If you’d like to support Nazirah’s altruistic mission, you can find her performing at Konda Kondi cafe, Ipoh on weekend evenings.