Mak Rosidah said that her videos usually only get 2 to 5 views. 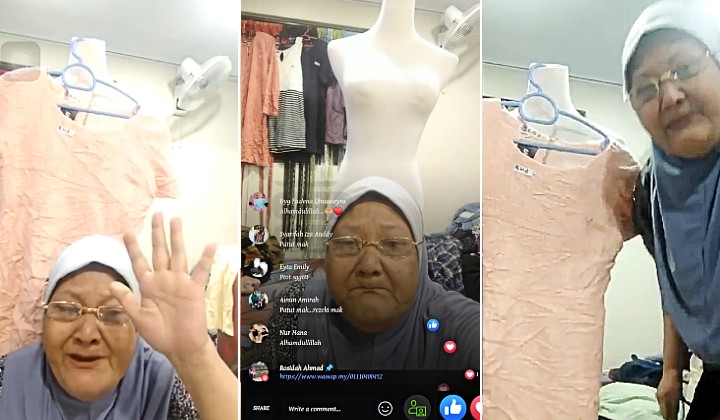 This sweet Mak Cik was brought to tears when her Facebook Live feed, for the first time, reached more than a hundred concurrent views as Malaysians flocked to show support for her online “bundle” clothing business despite it being 3.00am.

A video going viral on social media saw Rosidah Ahmad, a businesswoman from Penang, becoming overwhelmed with emotions when the view count for the online store that she hosts live from home, kept on climbing.

“I am so moved, there’s 54 (views) already, so many that’s commenting. I’m sorry, I apologize okay” said the elderly entrepreneur, referring to herself as ‘Mak’ or mother as she tried to control her feels and apologized for not being able to reply to the comments pouring into her feed.

“71 views! I’m dead!”, blurted the lady as more and more people came to view her video before proceeding to sell her garments for RM1 each.

Mak Rosidah, who apparently also sells Nasi Lemak for a living, confessed that her videos usually only get a maximum of two to five views and was deeply grateful for the sudden popularity she received.

She even remembered the names of the people who first viewed her live feeds, bought her products and continued to give her support.

As one would imagine, the touching video tugged hard on netizerns’ heartstrings.

Posting a quick update for her customers, Mak Rosidah promised to showcase more clothing as she takes a late-night trip to the bundle clothing warehouse to replenish her stock.

Head on over to Mak Rosidah’s Facebook page to show some love or join the Terbaik e-Store Facebook group where she is said to host her live video store.