We were wrong all along, we should have been eating rice with a knife! 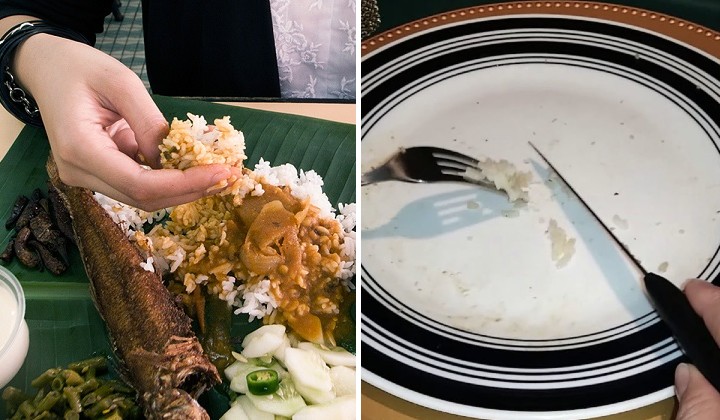 Grant Harrold, also known as The Royal Butler on Twitter and was the former butler of the British monarchy, probably didn’t know what to expect when he tweeted that rice should only ever be eaten with a knife and fork or chopsticks, and never with hands or fingers.

Ladies and gentlemen, remember we always use a knife and fork or chopsticks to eat rice! We do not use our hands or fingers !!! 😨 pic.twitter.com/xCJEKXg26K

To this, he has received responses in varying degrees of politness, but almost all in complete disagreement.

Why though? Can't possibly be an aversion to using hands and fingers because I've seen the way most of you devour a pack of fish and chips…

Say the people who doesn’t wash their butt with water. Also step in the house with their shoes on (which already contaminated by god knows what).

At least I know where my hand had touch. Do you know how they clean the cutleries and what mouth they got into when you eat outside?

His bizarre opinion drew the ire of many cultures who eat rice with their hands, and more even more who just found the tweet antiquated and offensive.

The British had colonised large parts of Asia, particularly India, for hundreds of years. Many cultures in Asia have a staple diet of rice and practice eating food with their hands.

Even in Malaysia, eating rice with hands are a common sight, whether out in public or in the privacy of our own home.

The dismissal of cultures that use their hands to handle food and the added implication that doing so is ‘unhygenic’ and ‘impolite’ speaks volumes about the inherent sense of superiority that exists in the people who colonised half the world.

However, his Tweets were likely meant to be specific to Western norms, and not universal.

Still, why isn’t the spoon considered for use with plain white rice?