Both are out on bail as police investigates the case. 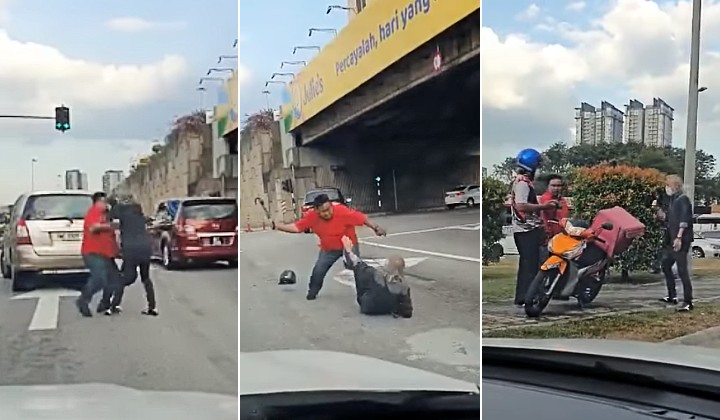 Footage of a street brawl between a biker and an elderly taxi driver at a traffic light in Damansara yesterday (5 March) evening had netizens curious for details.

The one-minute-ish video shared online captured the tense moment when the biker, seen in the red shirt, had struck down the gray-haired taxi driver before continuing to hit the senior citizen with a steering lock in the middle of the road as traffic passed by.

As the scene went on, another motorcyclist, who had the signature pink FoodPanda backpack on his bike, stepped into frame to put an end to the fight, pulling his fellow rider away from the man who laid on the ground.

The biker and the old man later continued on their altercation by the side of the road, using words instead of fists before proceeding to go back to their vehicles.

Unsurprisingly, both men were arrested on Saturday (6 March).

According to Petaling Jaya Police Chief Nik Ezanee Mohd Faisal, the fight was apparently triggered when the 71-year-old taxi driver had allegedly switched lanes on the road without signalling – prompting the 41-year-old motorcyclist to confront the driver when they later came to a stop at the traffic light.

The biker, supposedly unsatisfied by how reckless the driver was, came knocking on the latter’s window before the driver stepped out of his vehicle with a steering lock in his hand.

After taking statements from both individuals, the Chief said that the taxi driver claimed that the biker had threatened him with a motorcycle helmet and used his own steering lock against him, while the rider had accused the driver of injuring his hands.

The Chief also said that both men had no prior records and are now out on bail as police continue investigations.