Those caught with illegal exhaust modifications can face fines up to RM2,000 and 6-months jail time. 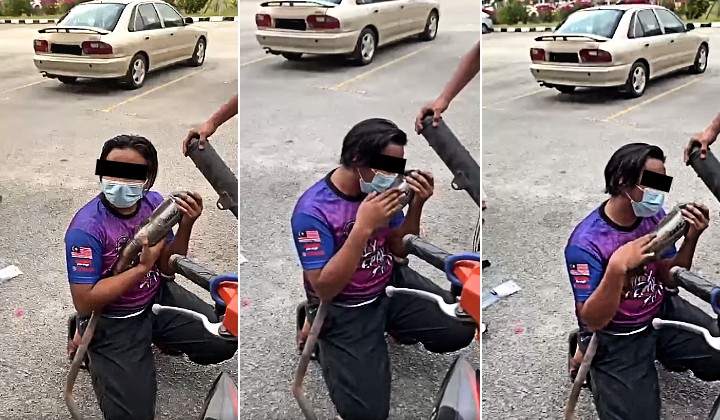 It appears that authorities aren’t messing around on enforcement against motorcycles with illegal modifications and noisy exhaust pipes.

A viral video showing the bikers themselves being forced to replace the illegal modifications made on their motorcycles at the Kuala Selangor police station has surprised many Malaysians.

Reportedly, 10 individuals between the ages of 18 and 25 were recently stopped at a roadblock for failing sound tests done by the Department of Environment (JAS). They were then ordered to come by the station with their old exhaust pipes, to have them replaced.

Footage shared on social media showed several youths working with their own hands and tools to change the illegally modified exhaust pipes they had installed on their bikes with regular or stock ones, under the watchful eye of police officers at the station’s parking lot.

One youth was even seen giving his beloved pipes a final goodbye kiss before handing it over to an officer as he and friends work on the bike.

The Traffic Investigation and Enforcement Department (JSPT) together with the Road Transport Department (JPJ) and JAS are on the lookout for noisy bikes.

Images circulating online showed law enforcement conducting stops and setting up microphones to test just how much noise were coming from peoples motorcycles.

Authorities were also said to be on the watch for other motorcycle-related offences including bikes that have “fancy” plate numbers or no side mirrors installed, besides catching people with expired road tax and licenses.

Those who are found guilty may find their bikes confiscated and face up to 6-months in jail and a fine of up to RM2,000.