The meeting was apparently arranged by local Kluang residence. 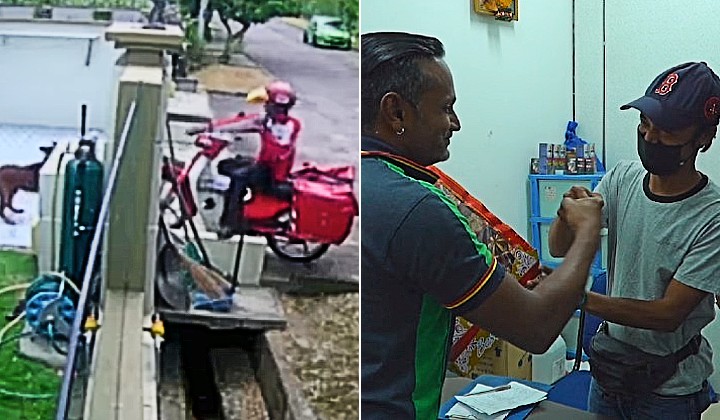 Saying that he was truly sorry for his actions, “Dollah”, the posmen responsible for injuring a family’s pet dog at a residence in Kluang, Johor met with the canine’s owner to make amends.

In a touching video that’s making rounds on social media, Dollah came face-to-face with “Encik Siva” and his wife “Puan Magesh”, owners of the pupper he had shot and injured using a “lastik” or a rubber band slingshot on 22 February.

His lapse in judgment was caught on video and sparked viral outrage from Malaysian animal lovers as well as resulted in his immediate suspension from work at Pos Malaysia, pending an investigation.

Appearing to be holding back tears, Dollah came to apologize to Siva and Magesh at their workshop in Kluang.

I am truly sorry. You know my job as a postman, it doesn’t pay much. I’m afraid I’ll lose my career. I’m sorry.

Accepting Dollah’s apology, Siva said that he understood the “tension” felt by someone working such jobs.

I understand. Working as a postman in the hot and rain. It’s stressful I know. I understand.

Having reached an understanding, the two sealed their meeting with a fist bump before Dollah presented Siva with an apology hamper.

Dollah later spoke with Magesh who told him that there were no hard feelings between them and encouraged the man to move forward with his life.

Don’t worry about what other people are saying. Now between you and me, it is settled.

Didn’t meant to hurt the dog

Dollah’s meeting with Siva and Magesh was apparently arranged by local actor and presenter Shahrol “Shiro” Azizie Azmi, along with the Umno Youth Kluang division and other NGOs.

Shahrol had earlier met with Dollah and his wife “Mas”, to get their side of the story during which Dollah said it was never his intention to injure the animal.

“I was stressed. It was unintentional. I didn’t mean to hurt the dog, I was just teasing it,” he said when asked about the incident.