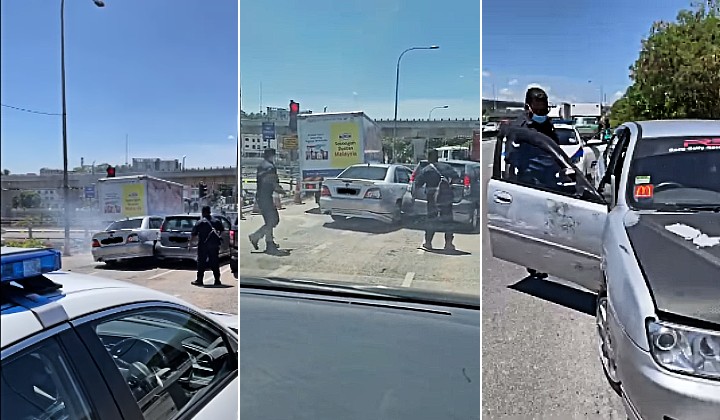 A series of clips spreading online witnessed the tense scene of police officers attempting to apprehend suspects who were fleeing arrest in a silver-coloured Proton Waja by crashing into other vehicles at a traffic stop near the Sungai Buloh toll plaza heading to Damansara.

In the videos, two uniformed officers were shown cornering the silver car which apparently found itself stuck in traffic behind a lorry and a grey Perodua MyVi during a red light.

As one officer attempted to open the car’s door, the driver began ramming into the vehicles in front, to get away.

With the car continuing to crash back and forth to squeeze through the obstacle, the other police officer began shooting out the car’s tires before the suspects managed to break through the roadblock just as the traffic lights turned green.

Another video later showed police having caught up to the vehicle which had been left mangled on the side of the road. The suspects, however, was nowhere to be seen.

After escaping police at the traffic light, suspects had driven the car towards Jalan Sungai Buloh near the Damansara Damai MRT station before coming to a stop and fleeing on foot.

TRP will continue to provide updates on the case as more reports come in.