The school principle was worried it would wander into the exam hall and disrupt students taking their SPM. 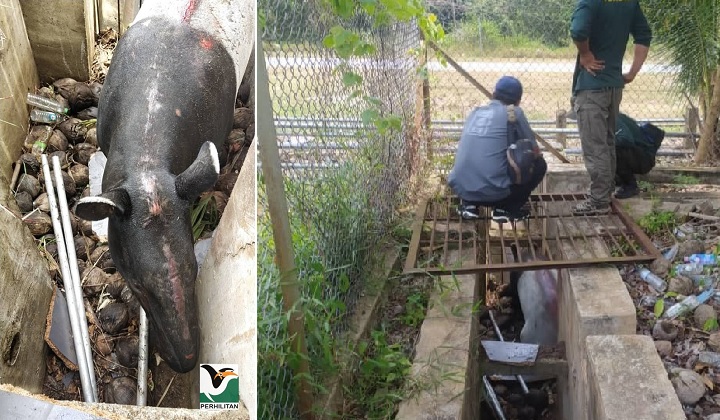 A male tapir wandered into a school where students were sitting for their Malaysian Certificate of Education (SPM/MCE) paper and created chaos.

He had reportedly wandered off to eat the leaves of a jackfruit tree before falling into a drain and needing to be rescued.

The incident took place at SMK Sungai Soi in Kuantan, Pahang yesterday morning, though pictures of the rescue only surfaced on social media today.

A thread on the Department of Wildlife and National Parks (PERHILITAN) twitter account chronicled the rescue, adding the operation involved staff from PERHILITAN Pahang, PERHILITAN Kuantan, and the Civil Defence Force (APM).

While photos show the tapir bleeding from the head and back, PERHILITAN said the wounds were only light and were believed to have been caused by it rubbing against the drain.

As soon as it was rescued from the drain, the tapir, estimated to weigh between 200kg and 250kg, ran off into the nearby jungle.

Speaking to Bernama, school principle Zolkifli Abd Ghani said it was not the first time such an incident had happened and he was “only worried the animal might wander into the examination hall and disrupt the students taking the exam”.

They’re easily recognized by their signature black and white body tone as well as their weird-looking but flexible proboscis.