The three wanted to go shopping in Seberang Jaya. 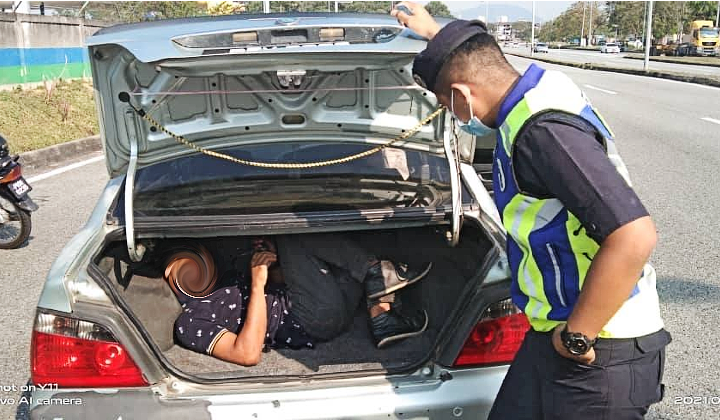 A trio of travelers in Kedah were reprimanded by police when it was discovered that one of them was hiding in the trunk of a car to escape Movement Control Order (MCO) restrictions.

Officers had caught the culprits trying to “smuggle” themselves during a roadblock on the Butterworth-Kulim Expressway (BKE) while they were on their way from Butterworth to Seberang Jaya on Wednesday (17 February) evening.

Reports say that the driver, a 35-year-old woman, and one passenger, her under-aged teenage stepson sitting in the front passenger seat, were stopped on the road for not having proper permits to travel across district borders.

They had originally told officers that they were on their way to shop for clothing at a mall in Seberang Jaya.

However, upon further inspection, police soon discovered another underaged teen – also believed to be the stepson – tucked away inside the car’s boot.

The woman was later fined for breaking MCO guidelines while the teenagers received a proper nagging for their actions before all three were asked to go back the way they came.

Despite the government allowing denizens in MCO and Conditional Movement Control (CMCO) areas to travel more than 10km from their homes, Malaysians are not allowed to travel across district and state borders without permission from the police.

People are also restricted to only travel in pairs inside one vehicle. A maximum of three people is allowed to travel in one car only in case of emergencies.