However, he said if there’s suddenly an SOP against it, he’d have to enforce it. 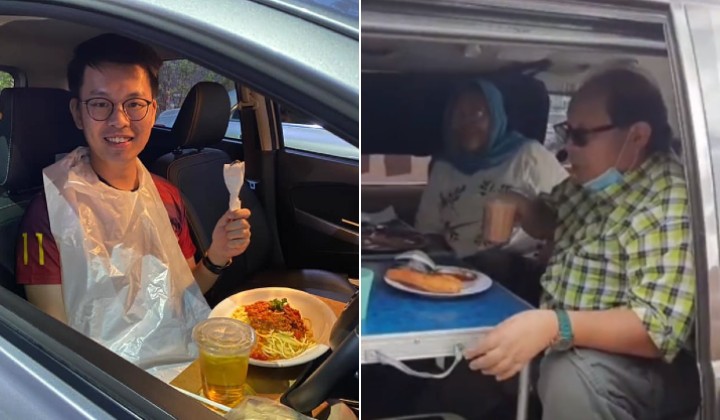 In a radio interview with Kool FM, Nik Ezanee explained that it was not against standard operating procedure (SOP) for people to eat in their cars after ordering takeaway meals or even for the eatery in question to serve food directly to customers to eat in their cars.

He said that there are no specific rules against dine-ins mentioned in the official SOP released by the National Security Council (MKN) and the public under his jurisdiction are allowed to do so as long as they abide by restrictions which limits a maximum of two people traveling in one vehicle.

He adds that unless a new SOP is announced which bans dine-ins, people in PJ can still have meals in their cars.

So far we have not received any orders… To me, this isn’t a problem… In PJ that is, I’m not saying in other places… There have been no reports or complaints about it.

The police Chief also mentions that the public’s compliance to the MCO in PJ was at 99%.

Recently, there has been a trend among restaurants in some parts of the country to serve food for customers to eat in their cars during MCO 2.0.

Malaysians were also seen sharing their MCO dine-in experiences at their local eateries on social media. Some had trays of food delivered to their car doors as they enjoyed a meal on their laps.

Staff bawa food and drinks atas tray to your car. Ni my parents pergi dating the other day.

Others, on the other hand, were seen taking a more direct approach to enjoying an in-car meal.

MCO SOP released by the government allows for restaurants – including those in pubs and nightclubs – as well as food stalls, hawkers and food trucks, to operate from 6am to 10pm via take-away, drive-through, or delivery.

The rules also mention that only two people from each household are allowed to travel in order to get food, supplies and medicine within a 10km radius or at the nearest available location.

However, the SOP also state that privately-owned cars, as well as company and government-owned vehicles, are allowed to travel to and from work or for official government matters with a set amount of passengers depending on the size of the vehicle.