Inside the armor was Muhammad Faizal Muda, an administrative assistant at the Temerloh Hospital. 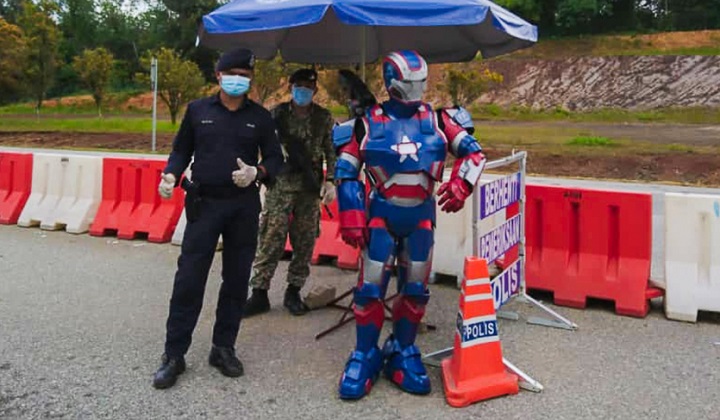 As if straight out of the Marvel Cinematic Universe (MCU), War Machine took to the road yesterday to meet up with Malaysian frontliners.

But instead of Colonel James Rupert “Rhodey” Rhodes, inside the armor was Muhammad Faizal Muda, an administrative assistant at the Temerloh Hospital.

And while the 37-year-old may not be powered by Tony Stark’s Arc Reactor, he is powered by a heart of gold.

He wanted to show his gratitude to the frontliners of the coronavirus pandemic as the country works to stop the spread of COVID-19.

On Tuesday, clad in a blue Iron Patriot version of War Machine’s hulking armored suit, Muhammad Faizal was taken around in a police car to visit frontliners manning roadblocks.

He spoke to the men in blue and soldiers, and paid a visit to the Temerloh district police headquarters (IPD).

As hospital staff, I fully understand how our frontliners are being overwhelmed and I want to reassure others that we will get through this.

“I want to reassure each other that we will get through this,” he said.

The Malaysian War Machine, who mainly dresses up as Marvel’s Iron Man, has been grounded since the Movement Control Order (MCO) started in March last year.

Prior to it, he had been bringing cheer to kids and adults alike across Malaysia.

His showmanship is always in demand at charity events, carnivals and birthday parties across the country.

The Movement Control Order (MCO) on March 16 last year put an abrupt halt to his showmanship.

Muhammad Faizal was inspired after watching the first MCU Iron Man movie in 2008.

He makes his Iron Man and War Machine costumes using a material called EVA Foam which is an excellent material for constructing costumes and props of all different kinds.

There are five different Iron Man suits in his collection, with each costing no less than RM3,000.

He previously appeared as Spider-Man at the grand opening of Marvel Studios: Ten Years Of Heroes exhibition at Pavilion Kuala Lumpur on 27 June 2019.

Being able to bring a smile or a laughter, especially to children, means everything in the world to me.