The cafe owner had previously gone viral for sharing her dissatisfaction over being fined. 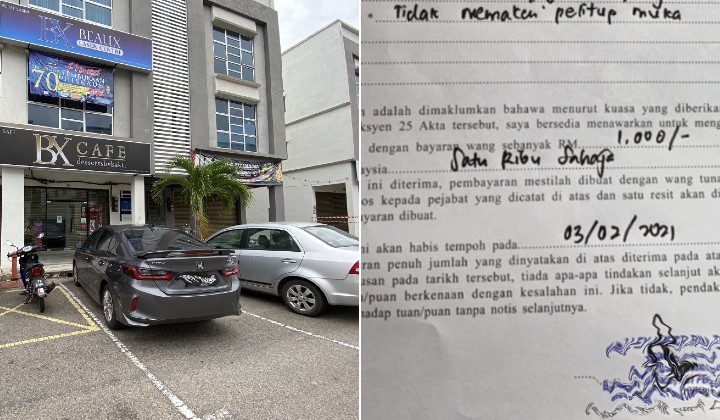 In an attempt to unmask the truth, a cafe owner in Segamat, Johor released CCTV footage to make her case against getting fined RM1,000 for not wearing a facemask out in public, when there was no one else around.

The clip showed the woman exiting her car before a police patrol MPV pulled over and four officers appeared on the screen.

Nur Izzati writes that the footage was evidence there was no one other than herself, her child and the police officers when she was issued the fine.

On 20 January 2021, Nur Izzati received a compound from the Segamat District Police for not wearing a face mask in a public setting.

However, Ayob Khan had explained in a statement that investigations proved that there were other people around the area at the time she was fined and that Nur Izzati’s claims to dispute the fact were untrue.

There was a cafe employee who was wearing a face mask at the time… So her statement that there was no one else around and that the place was not crowded is not true.

In her defence, Nur Izzati said that the worker in question was an employee that lived with her in the same house and was part of her “social bubble“.

She further stated that her case might already be a lost cause and is presumably no longer pursuing to have her charges removed.

At this point, I wouldn’t mind paying the RM1,000 but all I want is for the people to know that I am not lying about the fact that I was not in a crowded area.