The Animal Emergency Management Manual provides SOPs for animal-rescue during floods and other natural disasters. 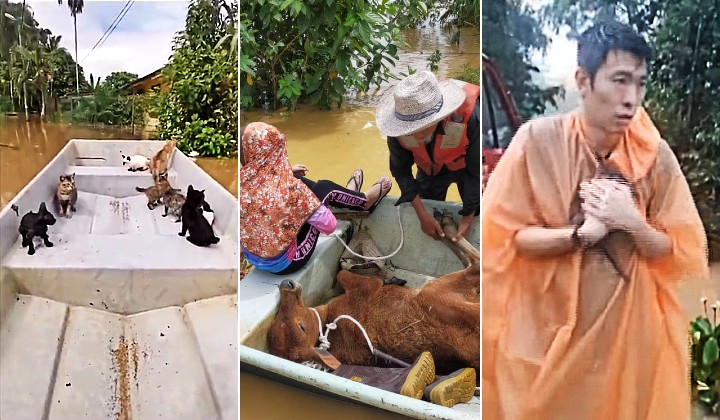 The annual winter monsoon season has led to major floods in several areas across the country with thousands of Malaysians in Kelantan, Pahang, Perak, Terengganu, Johor, Sabah, Sarawak as well as here in Selangor, forced to evacuate their submerged homes and businesses.

As people rushed for the safety of high-ground, the nation’s animal lovers began voicing their concerns about the fate of our pets and livestock animals that might be trapped by the flood, with nowhere to go.

On top of that, sightings of wild animals – like this group of wild boar – struggling in search of dry land, also had netizens worried

However, amid harrowing news of animals drowning and being left unfed for days, Malaysians were more than grateful to the brave and kind people who often risk their own lives to save our furry, feathery and leathery friends.

Like the efforts shown by one brave captain in Pekan, Pahang who took a boat and navigated floodwaters to rescue a number of kitties in distress.

Or how one family in Kemaman, Terengganu went on a boat ride of their own to keep a heard of cows fed and even managed to rescue a newborn calf from the waist-deep water – despite suffering some casualties.

Even Zoo Negara had its share of heroes as footage showed staff members frantically trying to relocate animals that were trapped in their waterlogged enclosures.

No animal left behind

Malaysian authorities with the help of locals have also been hard at work coordinating rescue and evacuation operations to save animals in flood-affected areas as well as provide locals with animal feed for their livestock.

The Department Of Veterinary Services Malaysia (DVS) even has its own Animal Emergency Management Manual (AEMMA), which are guidelines to mitigate emergency operations during times of natural disasters such as floods, droughts, earthquakes or tsunamis which includes efforts to safely relocate animals in danger and keep them fed and healthy until conditions return to normal.

But for those of you who are still worried about the safety of your pets and animals, feel free to check out our tips on how you can ensure your furkids stay dry and happy during this monsoon season, HERE.