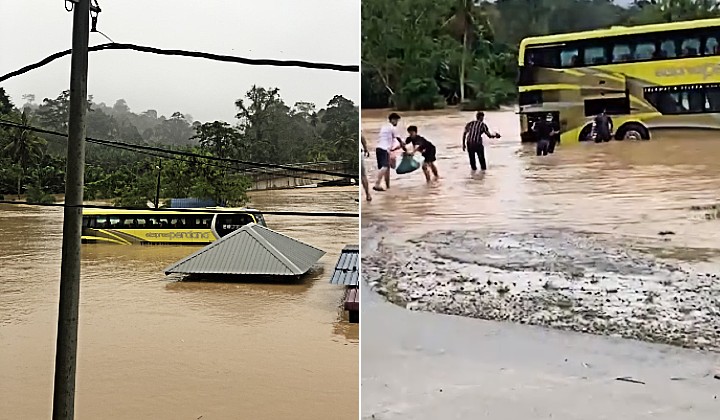 Several travellers experienced first-hand how quickly Malaysia’s flood woes can turn from bad to worse when they were forced to spend the night at a mosque in the middle of nowhere, after their express bus was left stranded and floating in several meters of water in Pahang on Sunday (3 January).

26-year-old Faris Nordin shared thrilling scenes of how he and around 40 other passengers had to be rescued and sheltered at Masjid Jeram Besu in Raub when their double-decker bus stalled while trying to navigate flooded roads on their way from Kuala Lumpur to Kota Baru, Kelantan.

Taking his tale to Twitter, Faris writes that the bus had made several attempts at traversing the flooded area but ended up being swept away by the water.

As the bus stalled in the water, the engines died, leaving passengers stranded without power and nowhere to go. Faris said that soon water began filling the first deck cabin of the bus and people began panicking and ran up the second deck to save themselves.

With the confidence we had during our encounter with the first flooded road, our bus decided to go through it once again. And tada !!!!! We are suddenly floating gaissss 😂

Luckily for everyone on board, the bus had stalled not far from the masjid which was on high ground and already had Fire and Rescue (Bomba) personnel stationed there. Faris said that Bomba later came to evacuate the stranded passengers by boat and ferried them to safety.

Videos of the rescue scene showed passengers escaping the dark bus through the second deck emergency exit and taking a boat ride through floodwaters that reached tree-level and were high enough to leave road signs halfway submerged.

Here I recorded the flood when we were escaping through the second deck emergency exit. Boats came to and fro the exit on a rescue boat to evacuate passengers to the mosque ✨ pic.twitter.com/NwOUwp4nVE

Here’s a video of our crossing . Quite deep lah the flood no joke pic.twitter.com/Z1QinYsClQ

Safely on high ground, Faris soon found that the mosque was already filled with other flood victims who were also left stranded and explained that everyone had to spend the night there with no electricity, running water, poor phone service and with just the clothes on their backs to wait out the flood.

Makcik to the rescue

Faris also shared how local residents from nearby kampungs were kind enough to provide flood victims with food, water and their hospitality. In true #KitaJagaKita spirit, villagers got together to cook hot meals and helped the victims wherever they could.

When the flood finally subsided the following day, Faris and his fellow passengers were safely transported back to KL on another bus provided by the bus operator.

Faris shares how grateful he was to have survived the experience and thankful to all the kind people who had helped them endure the peculiar situation.

Reportedly, several areas in Kelantan, Pahang, Perak, Terengganu, Johor, Selangor and Sarawak are affected by floods – forcing thousands of people to be evacuated.

However, the Malaysian Meteorological Departments (MetMalaysia) had explained that the current flood situation was “normal” and that it won’t be as big or bad as it was in 2006, 2007, 2013 and 2014.

The government had also advised Malaysians living in flood-prone areas to keep track of the flood situation by following real-time alerts through the Public Infobanjir website or the MyPublic InfoBanjir mobile application.

But the Malaysian Communications and Multimedia Commission (MCMC) revealed that there are several areas across the country that are experiencing communication service disruptions due to power outages and advise the public to be sparing with their use of devices – only communicating for emergencies.

Malaysian social media channels have been flooded with scenes of homes, businesses, highways and even whole towns, submerged in water.

banjir Temerloh as of 2pm today 😫 pray for the best #PrayforPahang pic.twitter.com/NkHAiMN172

Communications and Multimedia Minister Datuk Saifuddin Abdullah reminded Malaysians not to repost photos and videos of previous major floods which had occurred in the country to avoid confusion and panic.