Apparently they threw away paranormal entities into the river. 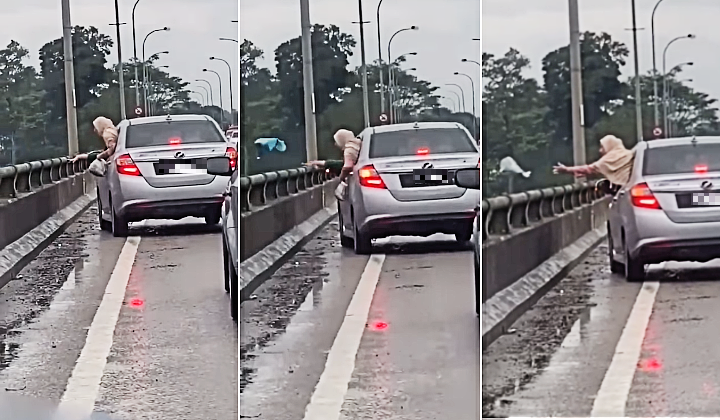 Malaysians were understandably outraged when footage of a woman throwing garbage from a car window and over a bridge went viral on cyberspace.

The 20-second clip showed a silver Perodua Bezza holding up traffic in order to let the car’s passengers toss away two unknown plastic bags over what’s believed to be a road bridge river crossing in Kelantan.

READ MORE: This boat in Klang River is cleaning up our trash thanks to 23yo Dutch inventor

As the car slowed down to a stop, two of the car’s passengers can be seen chucking away the items. One of the passengers which netizens took to calling “makcik” had nearly half her body out the window to swing the rubbish away as far as possible.

Besides sharing their dissatisfaction on social media, Malaysians also expressed embarrassment over the viral scene and demanded authorities take immediate action against the litterbugs.

“Appears to be a makcik. But why does this makcik have no civic awareness? Why throw garbage into the river? Don’t you know that animals in the river are also God’s creatures? If someone throws rubbish in your home, wouldn’t you be angry? Think about it makcik.

I totally don’t like a litter person. What’s wrong with throwing trash at a designated spot. Rivers are not garbage dumps. The person truly has no civic, should be finned. One more thing right now, people like throwing face masks everywhere.

Some netizens even went as far as tracing the car’s registration number in order to expose the culprits.

As the video continued to spread online, an explanation surfaced claiming the reason behind the makcik’s misbehaviour.

According to sources, passengers in the car were supposedly a family who had returned from a traditional healing session in Kuala Krai. Apparently, they had been told by the healer to throw away the objects, which was said to be “saka” or a supernatural entity, into the flowing river.

The Federal Territory Mufti’s office described saka as supernatural beings such as jinns, syaitan or devils, toyol, hantu raya and others, which are kept as means to protect an individual and their property from harm.

These saka are believed to be passed down from generation to generation, sometimes without the person even knowing about it.

The act of keeping a saka is considered syirik or strictly against the teachings of Islam and individuals are encouraged to have these entities removed.

The explanation continues to mention that the family were deeply troubled by the viral video and asks for the public to stop their speculation and criticism.

However, netizens weren’t convinced by the paranormal reasoning, with some pointing out that littering is still a crime.

Buang SAKA they said, and then use their victim card. 😌 as easy as that to run from the main problem. Mmmmkay

We have to educate our Malay people to throw saka inside biodegradable containers. No plastic bags!

The video also managed to reach the Environment and Water Minister Datuk Tuan Ibrahim Tuan Man who was upset by people polluting our rivers.

In 2020, Malaysians were infuriated by footage of two individuals who were also caught on camera dumping waste into a river in Puchong, Selangor.