He stubbornly crossed the highway despite being warned by shouting bystanders 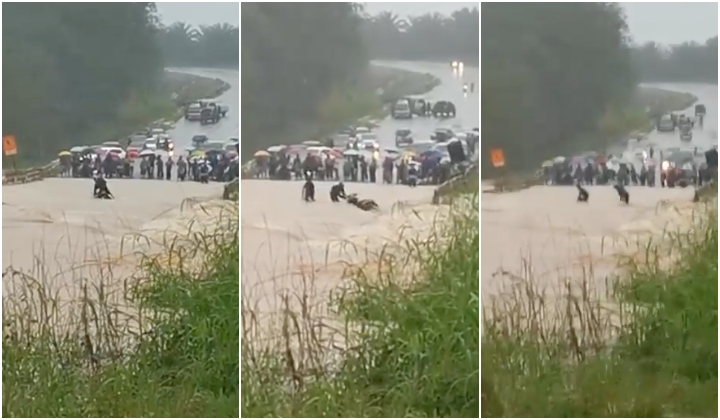 The Malaysian online sphere is taunting a man for losing his motorcycle while trying to stubbornly cross a highway that had been flooded with fast flowing water.

In the 30-second video shared on social media, a man can be seen trying to hold on to his motorcycle as it gets dragged by the strong water currents while onlookers heckle him saying “we told you so!”

According to the popular local Facebook page Info Roadblock JPJ/POLIS, the incident happened between Felda Jengka 15 and 16, in Maran, Pahang.

Based on the comments, it appears that the man had been told to be patient and wait for the floodwaters covering the highway to subside before trying to cross.

However, the man stubbornly decided to take his chances and wade through the fast-flowing water anyway, causing him to not only lose his bike, but maybe also his dignity.

Aside from being heckled in person, the man was also heckled through comments online, for pretty much the same reasons – that his life is more important than his motorcycle or his need to cross dangerous floodwaters.

Don’t fight natural phenomena. Now your motorcycle is lost in the flood. I don’t know if I should sympathise or scold those who are stubborn like this.

Stubborn acts. Everybody advised you but you were still so stubborn. Now you have to face what that stubbornness has caused you.

Let your motorcycle go, but don’t let your life be dragged off by the flood as well. I hope everything goes well for you.

Floods in Johor have already affected at least seven districts causing the number of evacuees to spike to over 5,000 people.

Heavy rain and floods have also been reported in some areas across Kelantan and Terengganu, as well.

Like stories about wild stories that happen because of floods? Read the ones below!

READ MORE: Genius T’ganu Siblings Make Flood-Resistant Motorbikes Because It Floods Too Much