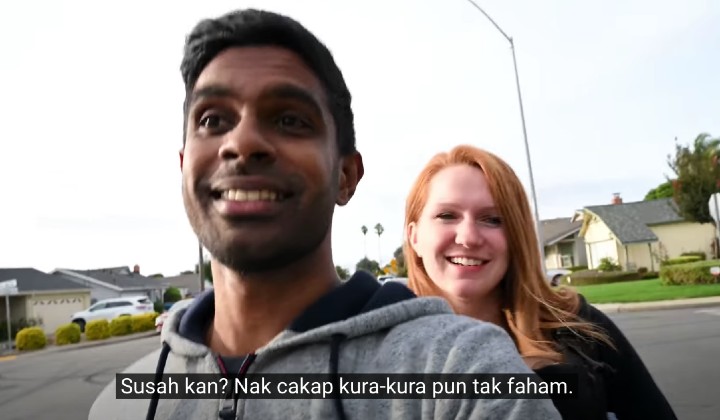 We’re not sure what it is that we like so much about listening to non-Malaysians speak our national language, but we just do! And it makes us so happy!

So, when Logesh Kumaar uploaded a video of him attempting a 24 hours challenge of speaking Bahasa Malaysia with his mat salleh wife, it’s no surprise that a snippet was quickly shared to Twitter and then went totally viral.

24 hours of only Bahasa Malaysia

In the 2 minute 19 second snippet shared to Twitter, Logesh can be seen trying to explain the meaning of kura-kura to his wife, Rachel Kumaar, without using any other languages besides Malay.

I got none of that.

Rachel gets adorably confused and laments on how she really misses being able to talk to her husband, adding that she’s sure all Malaysians watching the video were probably yelling at her through their screens.

In the end, Rachel manages to pull through and solve the language puzzle in a way that has us madly cheering for her.

The video was circulated so widely that it actually ended up appearing on Logesh’s own timeline.

Twitter users were mightily impressed with Logesh’s fluent BM. They praised him for having a nice voice as well saying it reminded them of the voice-over used in Malay translated National Geographic videos.

Some also corrected Logesh saying that kura-kura which is commonly mistaken to mean turtle, actually refers to tortoises. The correct word for turtle in Malay is penyu – which means sea turtle.

Speaking to TRP, Logesh, who is originally from Klang, Selangor, said that they started the 24 hour BM challenge as a way for Rachel, who is an American from California, to continue learning the language.

He explained that they got the idea for the challenge from their YouTube channel viewers, saying he enjoyed speaking Malay for one whole day since he doesnt really get much opportunity to speak it in the United States.

He shared that he loved hearing Rachel speak our national language as well, but admitted it was challenging at times and a little exhausting when they weren’t able to communicate certain things to each other.

When i could understand something it felt very rewarding.

She also shared that the challenge has inspired her to learn more Malay.

I love the language and hope to one day be fluent!

Since his video went viral, Logesh urges all Malaysian to embrace our beautiful language and culture.

He said that he initially didn’t appreciate our Malaysian culture until he moved overseas, which then caused him to realise that he was proud of his background, heritage and country.

I was so proud to call myself Malaysian. I love my Tanah Air even more! Ever since then, I do my best to share our culture, food, with as many people as possible.

Watch the full video of their challenge on YouTube.