It took eight hours to make the seven-second clip. 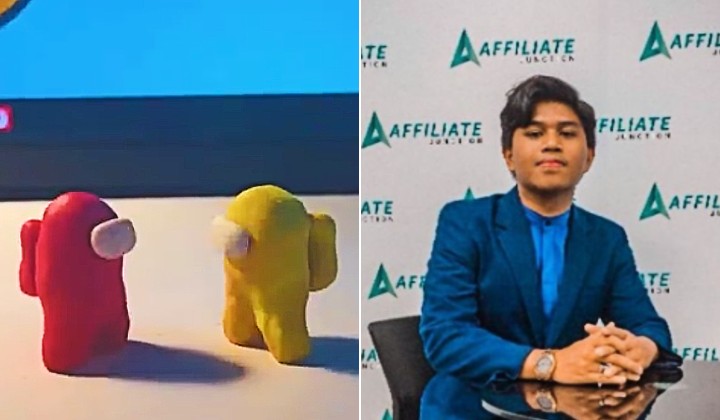 A creative Malaysian artist brought to life a sculptacular stop motion animation scene featuring characters from “Among Us” – one of the most popular video games of the year – on his bedroom desk.

In videos posted on social media, 19-year-old Zahirul Hassan Abdul Karim from Taiping, Perak shares snippets of his work on making a short but dramatic live-action scene between two Among Us crewmates, where one cutely MURDERS the other!

Breaking down his masterpiece, Zahirul explained that it took him a total of eight hours just to record, edit and complete the seven-second animation – having sculpted the lovable characters out of plasticine clay and meticulously moving and repositioning the sculptures frame-by-frame to make the entire scene. The video was also impressively shot using an iPhone7.

Netizens were more than roused by the skillful animator’s hard work.

Making classic Tim Burton animated films like “The Night Before Christmas” as his muse, Zahirul told TRP that his love for making stop motion videos started when he was 11-years-old. Now a Computer Science major at Universiti Teknologi MARA (UiTM) Tapah, Zahirul said that he’s been passionately animating videos for the past nine years.

Feel free to check out some of the artist’s other stop motion projects and hobbies on his personal YouTube channel.

In other news, the Among Us online-multiplayer party game, which first came out in 2018, would now be available for play on the Nintendo Switch console.

Prep the airlock and join your crewmates in a multiplayer game of teamwork and betrayal!!#AmongUsGame by @InnerslothDevs is available today on #NintendoSwitch! #IndieWorld pic.twitter.com/RTrsLS02tV

The game had become such a worldwide phenomenon during the global Covid-19 lockdowns that its creators cancelled the sequel to work on improving the current game.

Other creative Malaysian talents even took time to make their own parodies and memes off of the Among Us craze.