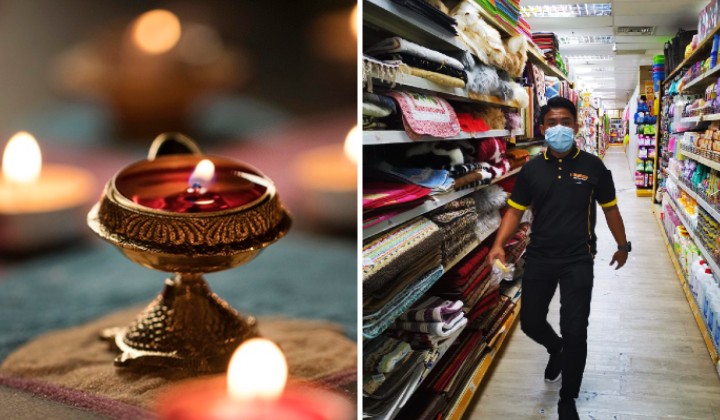 A day before Deepavali, a last-minute shopper walked into a well-known hardware chain and found that all the Deepavali decorations gone, leaving behind only the Christmas items.

Shocked, particularly since it was still one day before Deepavali but more than a month away from Christmas, Facebook user Dannis approached the store’s floor staff in search for the decorations.

He was brusquely told that all the Deepavali decorations have been kept away in the storeroom, and were no longer available for purchase.

As he was leaving the store empty-handed, he was greeted by the cashier, so Dannis decided to try his luck asking the cashier for the Deepavali stock instead.

Immediately, the cashier sprung into action, directing another staff member to check the storeroom while apologizing to Dannis. The cashier even called up the boss of the store, insisting that a customer wanted Deepavali merchandise and thus it should be taken out of the storeroom.

Later on, the cashier even entered the storeroom himself to get the merchandise. He let Dannis browse the items to his heart’s content and Dannis finally went home with all the Deepavali decoration he needed.

Others shared the post (which has almost 1,500 shares as of time of writing) with many comments in support of the cashier.

When contacted, Dannis even said that he would be open to hiring the cashier! He noted that his company would appreciate someone who is that customer-oriented.

For those who have never worked retail, cashiers rarely handle stock and usually hand that off to floor staff. Essentally, this means that the cashier was doing more than “just his job”, in fact going above and beyond to help a customer in need.

We have also reached out to Mr DIY for additional comment.

11 Must-Try Indian Desserts To Sweeten Up Your Deepavali Weekend

Light Up Your Deepavali With Movie Specials On Astro Channels