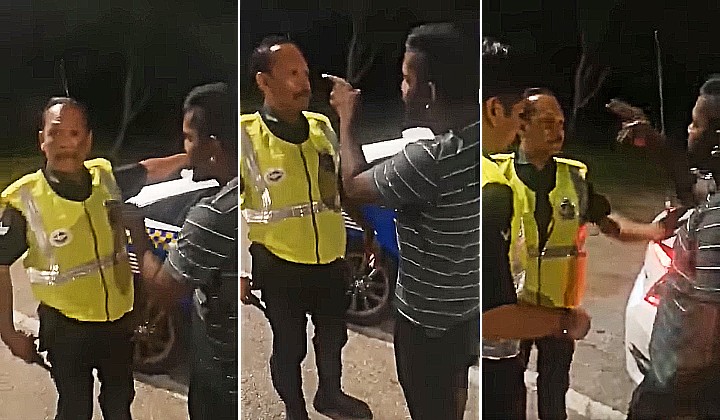 Subscribe to our Telegram channel for the latest updates on local issues.

A group of men were arrested for causing a ruckus near the Slim River Toll Plaza in Perak at 3 in the morning, but not before making complete fools of themselves on camera.

Reportedly, four men between the ages of 25 to 41 and believed to have been intoxicated, were detained by police for having a late-night party by a roadside and getting rowdy with the cops who were sent to ask them to leave.

Perak Criminal Investigations Department (CID) explained that a patrol car was dispatched to the scene after getting public complaints about a group of drunks blasting music from their car speakers there at 3.30 am on October 16, 2020.

As police instructed the group to disperse, it’s said that two men from the street party became aggressive and provoked the attending officers with one of them even recording the incident on video, that wouldn’t you know it, has gone viral on social media.

The one-minute-ish video depicts two individuals intimidating a uniformed police officer who had his pistol out of his holster.

In the clip, the officer is seen clenching his weapon while facing off with one of the suspects as the other shouts insults at him from behind the camera.

“Okay you shoot!” said the man in the footage before getting physical with the officer by unzipping his vest.

All the while, both men kept questioning the officer on why they needed to leave and barked that the officer had no authority there.

The video arguably had netizens outraged at the level of disrespect shown towards the public servant.

So does it mean that we have to be rude and disobey people of authority? Perhaps these people did not have good upbringing. As a teacher, it saddens me that these situation could be avoided with good, responsible parents!

Others were also concerned over the negatively fueled racial stereotypes and slurs being thrown into the comments section of the viral incident.

It saddens me to see so many keyboard warriors here are making this a racist issue. They made a huge mistake and they should be punished for what they have done but not for what race they are from. Grow up Malaysians.

All four men were arrested and investigated under Section 186 of the Penal Code for obstructing the law which can land them a fine of up to RM10,000, jail time of not more than two years, or both.

Apparently, all of them also had previous drug-related offences.

No drinking in public?

Malaysia does not have any specific laws preventing people from being drunk or drinking alcohol out in public, however, there are bans and bylaws in place to more or less discouraging drunk and disorderly behaviour.

Provisions under the country’s Syariah law for instance – which varies from state to state – imposes a complete ban on Muslims consuming alcohol with various punishments in place for those who are caught doing so.

Meanwhile in Selangor, the State Government had introduced bylaws which outlaws drinking alcohol at public parks and playgrounds with a fine of RM1,000 charged to offenders.

Additionally, the Federal Government has also implemented harsher punishment for driving under the influence (DUI) charges with extended jail time and heavier fines.