The dad has been away for work in Singapore since the start of the MCO. 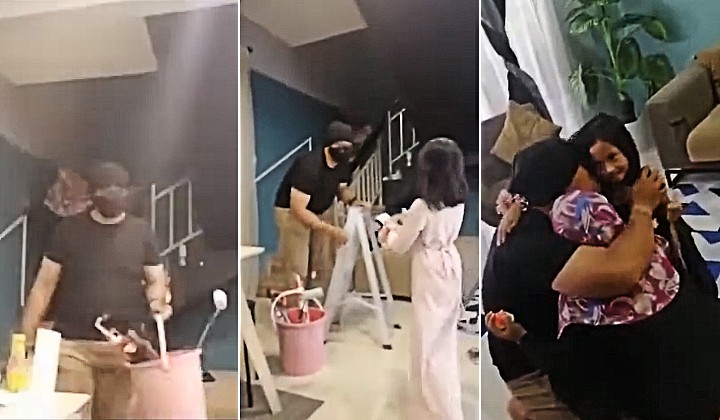 Malaysians practically melted over viral footage of a father disguising himself as an air conditioning repairman to surprise his children after being away from home for 7 months due to the Movement Control Order (MCO).

Wife and mother, Massoezailin Saleh, shared a video of the tender family reunion that she had set up with her husband, Mohd Azaruddin Tukari, to surprise their three daughters.

In the four-minuter-ish clip, the father is seen entering their home with his face covered in a face mask and sunglasses to hide his identity while carrying a ladder and a bucket full of tools to complete his disguise.

According to the mother, the couple was trying to see if the children still recognized their father after being away from each other for so long.

As the dad pretended to work on the air conditioning unit that was in the living room, the three girls got curious and started closely observing the strange man in their house.

“That looks like papa.” said one of the girls in the video as they begin to get suspicious of the kind stranger that was giving them snacks.

The cute ruse finally came to an end when Azaruddin pulled down his mask for a drink of water, welcomed by a big hug by his three little girls.

As the video spreads across cyberspace, warmhearted comments came flooding in with netizens shedding tears to the family’s touching reunion.

for everyone who gonna watch this video! pic.twitter.com/zBF3S0PRGX

Me when they hug: pic.twitter.com/gf9mYgp7hy

Azaruddin was said to be working as a bus driver in Singapore and had been separated from his family since the start of the MCO in March 2020.

Through their separation, the family appeared to be staying connected with lovely little letters handwritten by Azaruddin’s children.

Apparently, the father would only be home for a short period of 14-days before returning to his job across the causeway.

Read More: Separated Family Waves To Each Other Across The Water Between Singapore And Johor