Students with learning disabilities are unfortunately often dismissed as stupid or lazy. 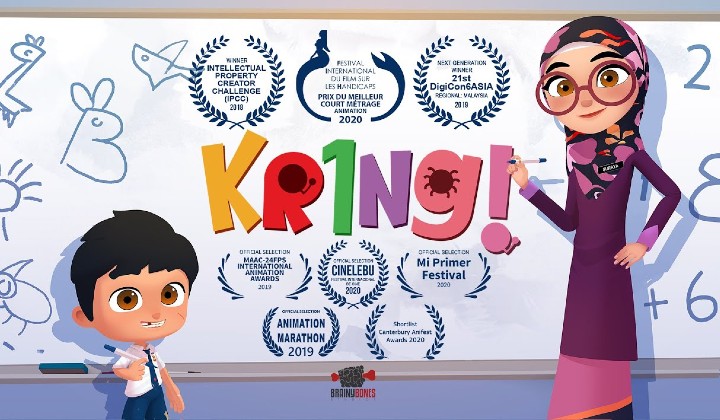 Local animation studio Brainy Bones Studios’ animated short film Kring! is a touching story about a teacher who went the extra mile for her student.

Director Hilmi Ismail recently shared the video again, which led to a new wave of interest.

how it's started vs how it's going 😄💪 pic.twitter.com/WprutimnWm

The short film itself is not new, having been published on YouTube in July 2019. It has also won awards locally and internationally, most recently at the France-based 4th International Film Festival on Disabilities, bagging the Best Animation Short Animation award against 6 other international entries.

You might be wondering what kind of disability comes into play, as the poster shows a normal-looking teacher and her happy student.

As it turns out, the 7-minute short film highlights one of the often misunderstood disability: the learning kind.

Learning disabilities aren’t talked about enough in Malaysia. Students who struggle in school are usually dismissed as lazy or stupid, but the fact of the matter is that some kids simply have learning disabilities that prevent them from performing in the regular academic institutions.

But real genetic and/or neurobiological factors can alter brain functioning in a manner that affects cognitive processes related to learning. Common learning disabilities are dyslexia, dysgraphia, and dyscalculia.

In the film, the young student shows a form of dyscalculia, a specific learning disability that affects a person’s ability to understand numbers and learn math facts, simply because their brain does not process numbers in a conventional manner.

The young student, Mael, visualizes numbers as little drawings, which results in an incoherent math homework, frustrating his teacher Suraya to no end.

After many attempts to teach him math, Suraya finally realizes that she should try to understand the way Mael’s mind understands math. When she tries teaching Mael through little drawings of her own, the two are delighted with Mael’s progress in math.

It’s an extremely heart-warming story about a teacher who didn’t give up on her student, and instead tried her best to adapt her teaching style to suit his needs.

Don’t believe us? Watch it for yourself below: