Scientist estimate that there are over 5 trillion pieces of trash floating in our oceans. 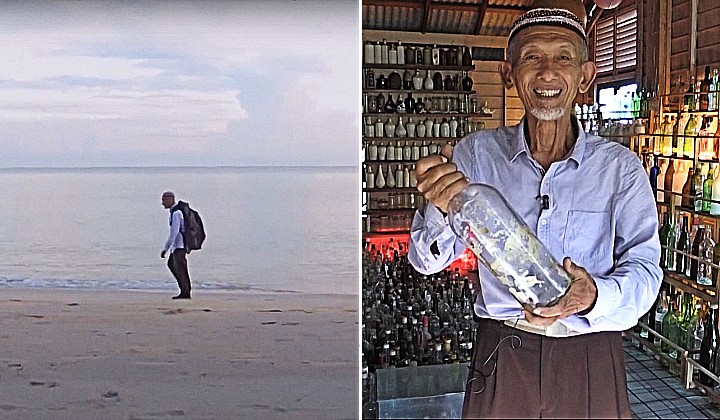 A senior citizen from Terengganu is taking the world’s discarded trash and turning them into his own personal treasures.

VIDEO: A 74-year-old Malaysian man’s quest to rid the country’s beaches of washed-up glass led to a collection of thousands of bottles, now displayed in a colourful seaside museum pic.twitter.com/uXxqSRMWYJ

Pok Ku’s obsession with glass bottles began in 2005 with the intention of keeping his beaches clean from debris coughed up by the South China Sea, especially fragile glass bottles that would cut and injure unsuspecting people wanting to enjoy a day by the ocean.

Finding that each bottle was unique, Pok Ku decided to keep them instead of throwing them away.

As his collection grew, Pok Ku would even pay children in exchange for bottles that they have cleaned up from the beach and even have people donating bottles to him freely.

15-years later, Pok Ku has amassed an assortment of around 9,000 glass bottles, vials, jars, mugs, and containers of all shapes and sizes which he holds very dearly.

His fondness for his glass collectibles even has him talking and whispering to the objects, as his way of showing gratitude for being united with another keepsake.

Among his most prized possessions are romantic “messages in a bottle” he found written by strangers from oceans away.

Pok Ku says that he would walk up to 17 kilometers a day to scour the beach for bottles to add to his collection, proudly displaying them at his own seaside gallery aptly named the Rumah Botol (Bottle House), located in Kampung Penarik, which he hopes would be part of his legacy.

Pok Ku advocates for people to take better care of the environment and thinks that littering was simply an awful behavior.

The world belong to us, we should take care of it…

Find out more about Pok Ku and his unique hobby via this short documentary on YouTube.

It is common knowledge that our oceans are polluted.

Scientists estimate that there are over 5 trillion pieces of plastic debris floating in our oceans aside from the millions of tons of sewage and sludge containing toxic and even radioactive wastes we unscrupulously dump into our waterways each year.

Meanwhile, Malaysia was also marked as one of the top nations responsible for polluting the seas, where we are said to collectively be accountable for over 60% of the ocean’s garbage.