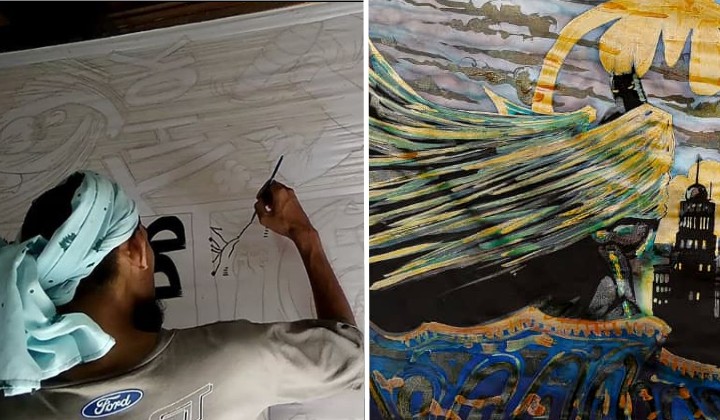 Amir Fadhli Fadzil, 31 has been making batik for a while now but what makes him stand out from other makers is that his artworks feature anime and cartoon characters.

Batik is a traditional way to make garments by using wax and dye which is applied to a cloth and often associated with the East Coast which are still making it to this day.

We got in touch with the man and went to his workshop to understand more about the batik-making process and how he got the idea to make anime-styled batik.

Amir said his journey into batik began around 2007 when he enrolled in a batik-making course offered by the Institut Kraf Negara until receiving his diploma in 2011.

After earning his certificate, he worked in the industry for 2 years before finding himself making cartoons for Ujang.

He said his time at IKN proved to be a valuable one as he learned from some of the best in the batik business.

The trainers that we have here is as good as those who are at the East Coast because most of them are from there and they have countless years of experience on their shoulders. So you learn from the best.

Even years after he has left the company, Amir is thankful for the things that he has learnt there which proved to be valuable when he went into making batik full time.

At Ujang, there was always the incredible attention given to detail from the background to the characters, and often if we didn’t produce our best work, it would be torn right in front of us and we have to work on it again.

It was from this sort of environment which gave Amir the eye to make detailed works of art on batik.

How he got into anime batik

Amir said the idea for the anime batik started off when he thought of putting cartoons on batik instead of traditional patterns as it hasn’t been done before previously.

He said it was originally intended as a side project before dedicating full time on the endeavour.

He has always been a fan of Japanese manga, citing Akira Toriyama, the man behind the iconic Dragon Ball series as one of his influences and also local artists Lengkuas, and Aie, who were cartoonists for Ujang.

If it’s not broke, don’t fix it

When asked about the advancements in the batik-making process, Amir said the way to make it has always been similar to how it was done generations ago.

Batik makers now still use the same type of paint which is mixed with two types of wax before it is added on the cloth.

If you use different types of paints such as water colour on the cloth, it was just fall right off. Even the cloth itself is made out of a special material, and it’s pretty expensive even compared to the stuff they sell at Jakel.

What makes a batik special and can be regarded as a work of art is mainly due to its bespoke nature as Amir said that the mixture of the colours make it one a kind.

Even if you want to make the same colour, it would never come out the same if you make one now and you make one later. So that makes it special.

He said his customers appreciate and understand the work that has been put into the batik, and would often treat it as an artwork.

It would usually take him around a week to finish the batik and prices would depend on the size of the illustration and its complexity.

Advice for the youth

Amir said regardless of the field that anybody is interested in, they should first try it first, then they would know what is the outcome.

It’s like if you have a car and you want to go somewhere but you don’t start the car, how are you supposed to arrive at your destination. If you have any ideas or things that you want to work on that you put in the back burner, you should always try it.

He even has a YouTube channel if you want to watch him in action.

Did You Know You’re Wearing Your Relationship Status On Your Kain Batik?