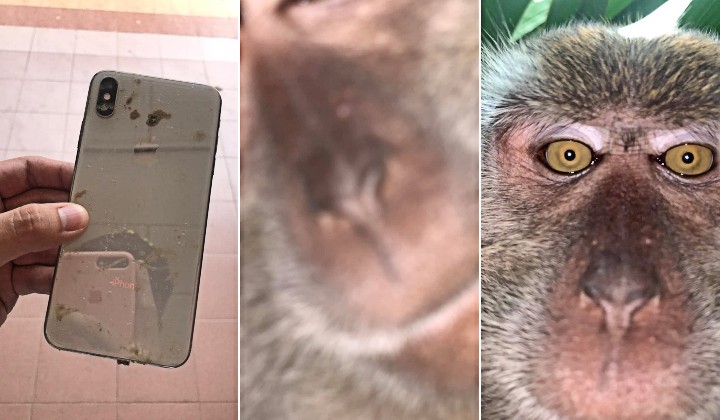 A mischievous monkey made off with more than it could bargain for when its light-fingers also revealed a quaint talent for photography.

The internet got a barrel of laughs when Zackrydz Rodzi shared the silly tail of how a monkey managed to “borrow” his iPhone for an early morning photo shoot up in the trees.

Apparently, Zackrydz had woken up one day to find his mobile phone mysteriously missing from his room, only to find its protective casing left suspiciously behind.

Thinking the worst, Zackrydz joked that his phone might have been taken by a burglar or even swiped by a mythical toyol.

Speaking to TRP, Zackrydz said that the missing phone had left him baffled, as his room was completely sealed off from the outside world on the second floor.

But not wanting to give up, Zackrydz had instructed his brother to give his phone a ring while he went on searching for it around his backyard, all the time wondering if it might have been taken by some animal in the night.

Unexpectedly, his hunch turned out to be right! Zackrydz finds his phone among the bushes and managed to recover it relatively undamaged, minus a few bumps and scratches.

Then, taking a look at his photo gallery, Zackrydz finally identified the culprit behind his phone’s disappearing act as it would appear that the thief had been a long-tailed macaque who had also managed to snap a roll of photographs of his mischief.

Images showed the macaque simply monkeying around, taking several close-up pictures of its face and surroundings, even taking a few slow-mo shots and videos along the way.

From the looks of it, netizens were more than amused by the incredible images taken by the primate-photographer, or as Zackrydz puts it, “Shot by Monyet”.

As ridiculous as it sounds, there has been a case made on whether an animal can claim the copyright for photographs or selfies that it has taken.

In 2018, British wildlife photographer David Slater won a legal battle for the rights of the famous “Monkey Selfie” picture taken of Naruto, a female crested black macaque from Indonesia.

With the images being used and shared on public domains such as Wikipedia, Slater had tried to have them removed by stating his copyright to the images as he had owned and set up the camera used by the monkey to take the selfies.

The photos later stood in dispute on whether animals could hold claims to intellectual property when the People for the Ethical Treatment of Animals (PETA) sued Slater for infringing on the monkey’s rights.

The United States (US) courts later ruled that the US Copyright law does not apply to animals like Naruto and that animals cannot sue for copyright infringement.

However, it’s said that Slater agreed to give 25% out of royalties he receives for the images to pay for the monkey sanctuary where Naruto lives.

Under the Malaysian Copyright Act 1987, a person has the exclusive legal rights to control their body of work from being stolen or used without permission.

This applies to creatively produced materials such as; literary writings, music, artistic works such as paintings and digital graphics as well as broadcasted material such as videos and photographs.

So by law, a person who arranges or captures the images has complete “authorship” claims of the images, unless that person is hired by another party to do so, in which case, the images would then belong to the person who pays the photographer.

However, the “fair use” clause of the Copyright Act allows for others to use copyrighted works without permission in certain circumstances, such as for educational purposes or for news reporting.

Read more: Can M’sian Media Republish Your Social Media Posts Without Your Permission?

So unless our mischievous macaque decides to file a copyright claim for his morning vanity project, we won’t really know for sure if animals can own intellectual property here in Malaysia.