This is why mental health needs to be addressed, and it is no laughing matter. 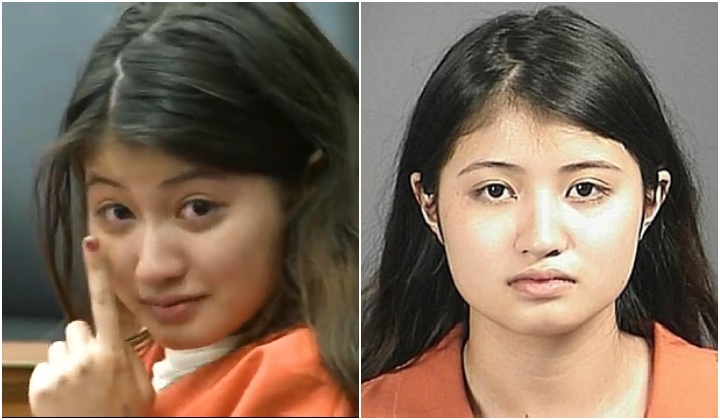 Recently, an old video posted in 2013 has resurfaced on social media and made waves again.

The video is of a “sweet-looking” girl smiling in court while wearing an orange prison jumpsuit with Ava Maxx’s famous song “Sweet But Psycho” dubbed over it. Isabella Guzman, 25, from Aurora, Colorado, in the United States was actually in court for being charged with first-degree murder.

According to court documents, Isabella had stabbed her own mother, Yun Mi Hoy, 151 times in the face and torso in the upstairs bathroom of their home. Isabella was only 18 years old when the incident happened in 2013.

The two reportedly had a difficult relationship, but it came to a point where Yun Mi had become concerned enough with Isabella’s behaviour that she called the police earlier on the day she was murdered.

Police responded to the call by visiting their home and advising Isabella that her mother could kick her out over her behaviour. Isabella’s biological father, Robert Guzman, also told the media that he had a talk with her before the tragic incident.

I went to talk to Isabella and we sat down in the backyard looking at the trees and the animals and I started to talk to her about the respect that people should have for their parents.

He said the talk seemed to calm her down, but acknowledged that it didn’t work as just hours later, “this thing” happened.

Later that night after Yun Mi went to take a shower after work, Isabella’s stepfather heard a thump coming from the upstairs bathroom.

Her stepfather, Ryan Hoy was downstairs during the incident and had called the local police when he saw blood pooling underneath the door of the bathroom.

While on the phone with dispatch, Ryan said that he was unable to get into the bathroom because Isabella wouldn’t let him in. A moment later, the bathroom door opened and he saw Isabella standing in the doorway holding a knife.

According to Ryan, Isabella didn’t say anything or speak to him as she exited the bathroom. Instead, she just looked straight ahead as she walked past him.

Ryan told dispatch that Isabella had left the house taking the knife with her and that as he performed chest compressions on his wife, he believed Yun Mi was already dead as she appeared to just be staring blankly.

When officers arrived on the scene, they discovered Yun Mi lying on the bathroom floor covered in blood. An autopsy found that she had suffered multiple stabs to the face and neck.

The next afternoon, officers arrested Isabella after she was spotted near a parking lot. Someone had called the police with a tip that they saw something suspicious.

In the viral video of her hearing, Isabella appeared to show no remorse for her actions and can be seen smiling and making faces at the courtroom camera.

Later, Isabella entered an insanity plea. The judge accepted the plea after a psychological evaluation found that Isabella had been suffering from a mental illness – paranoid schizophrenia.

Paranoid schizophrenia is characterized by symptoms of schizophrenia, including delusions and hallucinations. These debilitating symptoms blur the line between what is real and what isn’t, making it difficult for the person facing the illness to lead a typical life.

Isabella has since been receiving treatment for her illness at Pueblo Psychiatric Hospital, Colorado.