As the story goes, if you say his name too many times, he will return. 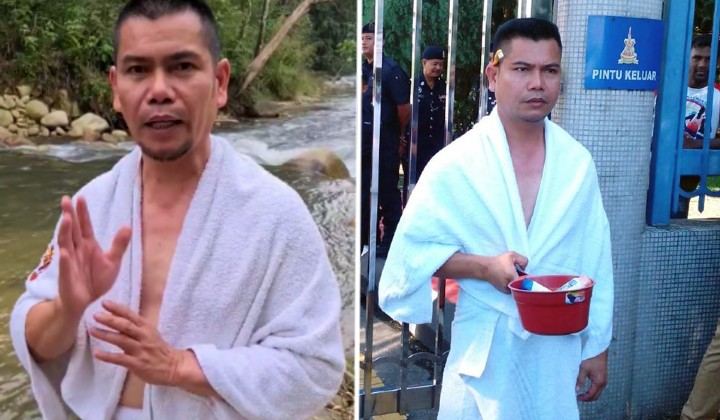 As the Klang Valley suffers yet another water cut, netizens started sharing old memes of Datuk Seri Jamal Yunos, clad in a white towel and holding a small bucket with his toiletries and his toothbrush tucked behind his ears.

The image was taken back in 2016, when the provocative Sungai Besar Umno Chief protested a water cut and wanted to enter then-Menteri Besar Datuk Seri Azmin Ali’s office to bathe, and then later threatened to bathe in the pools at KLCC.

Evidently, what he had done in 2016 is now looking like a welcoming alternative as the state struggles with no water for days.

Yet right as netizens jokingly mourned the lack of a Jamal Yunos in his righteous fury, he returned with two new videos, clad in the now-iconic white towel again.

However, this time he merely noted that back in 2016, he was already bringing up the water problems faced by the people of Selangor and the large impact it had on millions of people. Instead, he was condemned as crazy, though he teased that perhaps his critics could swallow their pride and admit that he is right.

In the videos, he further questioned what Selangor Menteri Besar Datuk Seri Amirudin Shari is doing to address the state’s longstanding water woes. After all, Selangor is notorious for having constant water cuts and disruptions.

He also invited Malaysians to join him for a dip in a river in Tanjung Malim, Perak. He notes that the water here is very clean as it flows from the Titiwangsa Range.

All of you who criticised me before should join me for a dip because you too don’t have running water.

However, he wouldn’t be Jamal Yunos without a bit of drama, which is why he is also staging a protest in front of the Selangor Menteri Besar’s office this Thursday. He urges supporters to come clad in towels and tuck their toothbrushes behind their ears.